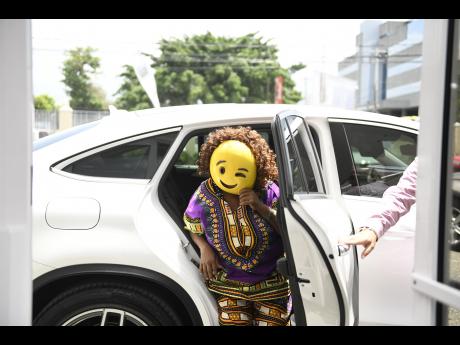 Gladstone Taylor
N. Gray arrives at the Spanish Court Hotel in St Andrew on Tuesday disguised with a wink emoji mask to collect her Supper Lotto winnings of over $180 million.

Before winning a huge portion of the J$301.5 million Super Lotto jackpot on May 11, N. Gray was swimming in debt.

However, today she is a multi-millionaire, after officially receiving a cheque for over J$180 million from Supreme Ventures Limited on Tuesday at the Spanish Court Hotel in St Andrew.

Gray walked away with the bonanza just a few months after she religiously started playing the Super Lotto game.

"God allowed this to happen. I am elated, because I was drowning in debt. I started buying Super Lotto in January, and I normally choose random numbers," Gray, who wore a yellow wink emoji mask to collect the cheque, told The Gleaner.

"I am employed, but I am not necessarily going to leave my job. Now I've won, I want to clear my debt, invest, and I want to do some travelling. I would like to construct a community centre for the youths in my community, so they can engage in something productive; somewhere where they can do information technology."

Gray is the second consecutive Jamaican winner in the Super Lotto game, which is a lottery played by other Caribbean nations.

The announcement was made by Supreme Ventures on Saturday, May 12, appealing to the holder of a Super Lotto ticket with the numbers 06, 11, 19, 26, 31, and super ball 10. She purchased her ticket from Medifair Pharmacy in Montego Bay, St James.

She could have gotten a much bigger prize had she purchased a $300 ticket, instead of a $200 ticket.

Considering that winners of lottery games in the past have gone broke shortly after receiving huge winnings, Supreme Ventures encouraged Gray to invest wisely.