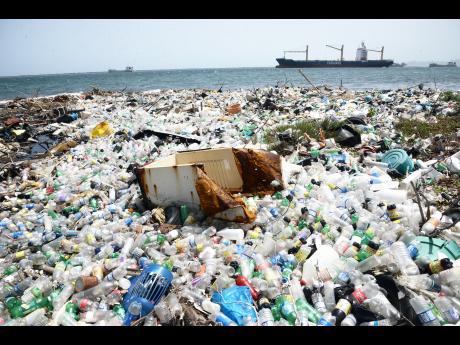 The Government is committing $75 million over three years towards the implementation of a plastic bottle deposit scheme.

This was announced by minister without portfolio in the Ministry of Economic growth and Job Creation, Daryl Vaz, who said the scheme is to be implemented in partnership with Recycling Partners of Jamaica, which has already taken on the task of reducing plastic bottle waste in the country.

“We are providing financial support to Recycling Partners of Jamaica – a private sector-led initiative towards the island wide collection and export of plastic bottles under the Housing Opportunities Production and Employment (HOPE) programme,” Vaz said.

He was addressing a World Oceans Day event dubbed ‘Save Our Sea’, hosted by Conservation Through Education Jamaica at the Urban Development Corporation’s (UDC) Orange Park in downtown Kingston on June 8.

Since November 2016, the project has collected over 1.3 million pounds of plastic waste for export.

Vaz explained that under the scheme, polyethylene terephthalate (PET) and other plastic bottles will have a value, so instead of throwing them out, persons can turn them in for cash.

“So people will not be in a rush to dispose of them but rather to cash them in, so that they can be taken out the garbage and the rivers and the streams,” the minister said.

He stressed that this is an initiative that “is sorely needed” to reduce plastic bottle waste in the country, pointing out that Jamaicans use and dispose of almost one billion PET bottles annually, which is equivalent to 350 bottles per Jamaican each year.

“The Government recognises the impact that improper solid waste disposal is having on the country and is taking several steps to rectify this problem,” he said.

In the meantime, the minister who oversees the environment portfolio, informed that the working group on single-use plastic, recently concluded its work and subsequent consultations were held with several stakeholders in order to arrive at a consensus on the actions that must be taken about this issue.

“We have already met with the manufacturers of these plastic bottles and indicated to them that the Government’s position is going to be announced in due course and we are giving them time to start to make the changes that are necessary,” he said.

In addition, Vaz said the Government was also working on a plastic minimisation project in collaboration with United Nations (UN) Environment and the Government of Japan to reduce and manage plastic marine litter from land-based activities in an environmentally sound manner.

Celebrated on June 8 each year, World Oceans Day aims to raise awareness about the crucial role the ocean plays in our lives and the important ways people can help to protect it.