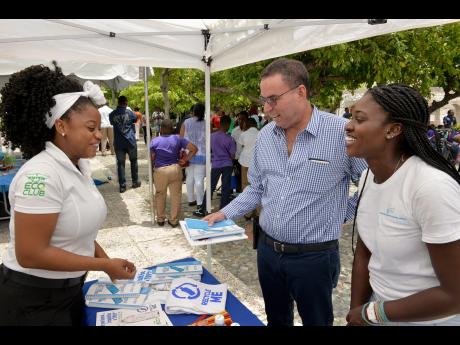 Minister without portfolio in the Ministry of Economic Growth and Job Creation, Daryl Vaz (second right), engages in a light moment with Brand Ambassador, Wysynco Eco, Kimberly Campbell (left) when he visited her booth at a World Oceans Day event, dubbed 'Save our Sea' . Also pictured is president, Conservation Through Education Jamaica (CTEJ), Tahirah Scott-Anderson. The event was hosted by CTEJ at the Urban Development Corporation's (UDC) Orange Park in downtown Kingston last week.

Minister without portfolio in the Ministry of Economic Growth and Job Creation, Daryl Vaz, has clarified reports in which he was mentioned as saying that J$75 million would be committed by the Government over three years towards the implementation of a plastic bottle deposit scheme.

The news item followed an address that was given by Vaz at the Conservation Through Education Forum at the Urban Development Corporation's Orange Park at the Kingston waterfront last Friday, in celebration of World Oceans Day.

In a subsequent news article, environmentalist and columnist Peter Espeut requested clarification on how the J$75 million would be spent, adding that it is "going to be a political project to employ people".

"Not so," said Vaz, who has responsibility for the environment.

In clarifying what he actually said, the minister said the J$75 million mentioned is not for the plastic bottle deposit scheme, Recycling Partners of Jamaica, or the HOPE programme, as was stated in a JIS press release published by The Gleaner yesterday, but is, in fact, earmarked for the 'Nuh Dutty Up Jamaica' campaign.

The minister added that the Nuh Dutty Up Jamaica campaign would receive financial support of J$25 million per year, over a three-year period.

The Nuh Dutty Up Jamaica campaign, which is spearheaded by the Jamaica Environment Trust, the Tourism Enhancement Fund and Wisynco, is a component of the Clean Coasts Project and aims to increase public education about the impact of improper waste disposal on the environment and on the health of Jamaicans.