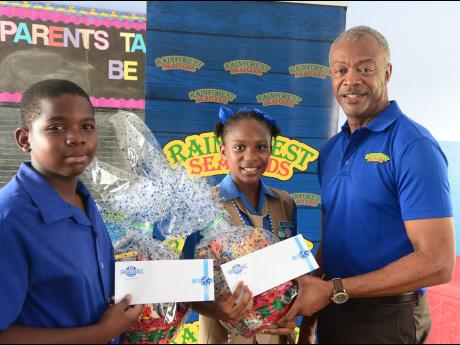 After travelling for six years from the Grants Pen community in St Andrew to the Iris Gelly Primary School in South St Andrew, Ashamarc Miller's determination has borne fruit.

She is the top Grade Six Achievement Test (GSAT) student at the institution with an average of 97. 4 per cent and was placed at Immaculate Conception High School, the school of her choice.

Miller and Jaheim Coombs, along with other GSAT students at the institution, were recognised by Rainforest Seafoods Limited, for their outstanding performances. Coombs, the captain for his class, scored an average of 95.5 per cent and will be attending Wolmer's Boys' School in September.

Miller, who is also a senior prefect and the top awardee at her school for science, social studies and mathematics, said it was difficult for her travelling such a long distance to school each day, but she loved the environment and was reluctant to leave.

"I travelled far and oftentimes I would reach home late at nights. But I am thrilled and very happy about my performance," she said.

Meanwhile, Coombs was over the moon that he was placed at one of the top boy's school in Jamaica. "My mother is very proud of me. She said if I continue doing well in the future, I can get a scholarship to further my studies," he said.

"I retain what is taught in class and remember what my teacher says, so my preparation for GSAT was manageable," he added.

Both students also received book vouchers, from Rainforest, to assist with their back-to-school preparations.

(EDITOR'S NOTE: A previous version incorrectly creditd the donation of the book vouchers to another entity)