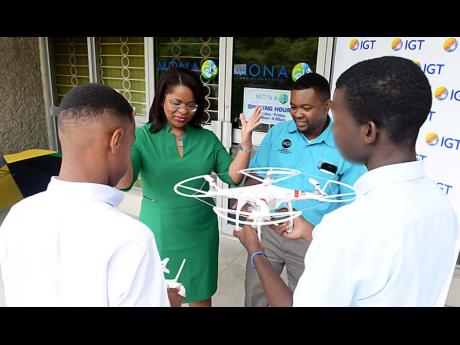 Four students from three schools equipped with IGT After School Advantage (ASA) Centres recently benefited from a tour of the Mona GeoInformatics Institute (MGI) at the University of the West Indies.

The visit was organised in partnership with IGT in Jamaica, with the aim of exposing the students to opportunities available in the field of technology.

Two young men from SOS Children's Village in Barrett Town and Stony Hill joined two students from the Women's Centre of Jamaica Foundation for a special tour of the groundbreaking research facility.

They were treated to demonstrations of cutting-edge technology, such as 3D modelling and imaging, and experienced virtual reality through goggles. They were also involved in drone demonstrations.

"At the IGT After School Advantage Centres, our goal is to open new horizons for the children," said IGT Jamaica general manager, Debbie Green.

"We want them to understand that there is a world of possibilities out there for them. This tour was an opportunity for this bright group of youngsters to learn and experience scientific advances in a hands-on environment.

"The visit to MGI helped to bring the working world of technology to life for the students. At IGT, we are committed to bridging the digital and information divide for our young people," added Green.

Information and communication technology adviser at SOS Children's Villages, Hector Simons, and counsellor at the Women's Centre Foundation, Rackeisha Dunn, said the visit had a tremendous impact on the students.

Simons said a 19-year-old at Barrett Town SOS Village, with aspirations of becoming a computer programmer, gained insights into the technical aspects of MGI's work.

"He is our Mr Fixit, and he is self-taught," said Simons.

He added that the 15-year-old student, a budding entrepreneur, from SOS Stony Hill absorbed a great deal of knowledge during the visit.

"He helps the other children with their homework. He is very engaged, and is always shadowing me so that he can learn more," declared Simons.

According to Dunn, the two girls, aged 16 and 17, who shared their dreams of becoming a forensic accountant and soldier respectively, were excited by the demonstrations and felt that their eyes had been opened to new discoveries, despite some shyness.

Executive director of MGI, Dr Parris Lyew-Ayee, challenged the students to be creative and to think critically. He also urged them not to "rush to grow up" too fast.

"I would like these young people to go out and change the world," said Lyew-Ayee, after discussions with the four students.

"I like to find an ember in young people, and to give it a spark," added Lyew-Ayee.