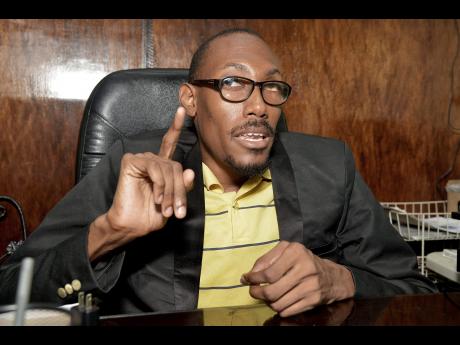 Germaine Barrett loves children, and wanted to become a father, but at 29 years old he has dumped the idea.

"I think I would be an excellent father. I would be nurturing, caring, loving, supportive. I just don't want my child to suffer," said Barrett, who is the president and CEO of the Jamaican Association for Debating and Empowerment.

Barrett has a genetic condition called Marfan syndrome (MFS), and as much as he would like to father a child, he is afraid to pass on this disease to an offspring.

"I believe that it would be quite selfish, and even cruel of me, to bring a child into this world, knowing that child is likely to suffer as I do on a daily basis. Every parent wants to see their child grow up healthy and live to an old age, yet for me, and likely my child, that would not be the case," said Barrett.

Barrett has most of the notable symptoms, which include long arms, legs, fingers and a curved spine.

"I experience some amount of pain each day. I do take pain medication to assist with the pain; I try not to take them unless it gets severe, because I don't want to get addicted to them," said Barrett, who grew up with his aunt in Cambridge, St James.

He told The Sunday Gleaner that his father, who is now deceased, had what seems to be the trait of the disease, but was able to live a relatively normal life; his mother had no trace of the illness.

Barrett attended Cambridge Primary School, Cornwall College and then University of Technology, where he earned a bachelor's degree in industrial and analytical chemistry.

He said during his tenure at school he had a supportive group of peers and so he never felt different. "I was a friend magnet," said Barrett, bursting into laughter.

When it comes to intimate relationships, however, Barrett says it's extremely difficult to find a partner with a similar perspective.

"My options are limited as I do not intend to have a partner who wishes to have a child with me," said Barrett.

For persons who claim the he is using MFS as an excuse to avoid the responsibilities that come with being a father, Barrett said they are way off the mark.

He argued that by avoiding fatherhood, he is demonstrating real strength as he has an incredible love and adoration for children.

"I believe I am strong enough to withstand any societal ridicule. The fact is that you don't have to be a biological father in order to father children. There are so many children in the world now who are in need of the love and care from a father.

"I think the world can do without another child whose quality of life is lessened due to the 'curse' from his/her daddy," said Barrett.

"I experience bouts of fright sometimes, at the prospect of growing old and not having a child. Sometimes I think I would adopt a baby, and not have him or her know that I am not his or her biological father, but then I come back to reality and realise that that, too, would be selfish and wrong.

"I suppose there is always the risk of rejection from a child, whether he or she is biologically yours or not. The act of parenthood is inherently risky either way, I suppose," added Barrett.