JET appeals to business community to save Schools’ Environment Programme 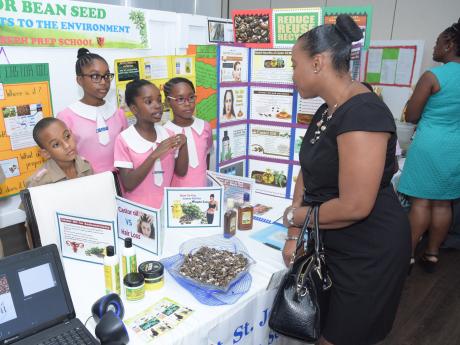 The programme, which has been operating in schools for 20 years, will possibly be scrapped due to the withdrawal of funding by the project's main sponsor, the Natural Resources Conservation Authority (NRCA).

Announcing the possible discontinuation today at the Jamaica Environment Trust’s (JET) 20th annual SEP awards ceremony at the Spanish Court Hotel in Kingston, JET's Chief Executive Officer Suzanne Stanley indicated that in February the NRCA, which has been funding SEP since 2012, informed that it would no longer be able to sponsor the project in the 2018/19 academic year.

Stanley emphasised that the prospect comes at a time when SEP had just been implemented in 39 schools in the current academic year.

After her announcement, Stanley called for leaders in the public and private sectors to save the programme.

“Environmental education is an important part of creating the change we all want to see in Jamaica...successful, results-oriented, long term projects with well-established followings like SEP lay the foundation for good environmental stewardship, and are the best shot we have of changing people’s hearts and minds about our environment,” said Stanley.

JET says SEP’s professional development workshops have given hundreds of Jamaican teachers the opportunity to expand their knowledge of environmental issues.

According to the organisation, the programme has inspired young environmental advocates and encouraged hundreds of successful environmental projects by schools in their local communities.

SEP has been propelled by enthusiastic principal and teacher support, parental and community involvement and the support of several longstanding corporate sponsors who were led by Total Jamaica in 2018.

Network Director of Total Jamaica, Howard Henry, who addressed the ceremony, commended teachers and parents for supporting the children and congratulated JET on SEP’s 20th anniversary.

Henry acknowledged Stanley’s call to save SEP and made a commitment that Total Jamaica will continue to support JET’s environmental education initiatives.

The 2018 SEP awards featured an exhibition of environmental research projects from top performing participating prep and primary schools from across the island.

Holland Primary emerged as SEP Champions, coping the top prize for their SEP work during the awards ceremony.

Carroll Western Prep from St. James, Sanguinetti Primary from Clarendon, Negril All Age from Westmoreland and St. Michael's Primary were all winners of sectional prizes for their research.