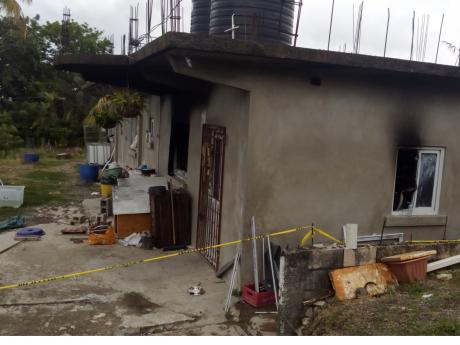 A section of the house owned by Alford and Florence Anderson in Portland which was firebombed on Friday, June 22, 2018 - Gareth Davis Sr. photo

Two men are in police custody in relation to the brutal slaying of the elderly couple in Portland whose partially burned bodies were discovered last Friday afternoon in the farming community of Mount Pleasant.

The suspects were reportedly picked up by the police between Saturday and Sunday at two separate locations following an intense operation.

Commanding Officer for the Portland Police Superintendent Duane Wellington told The Gleaner that investigators are conducting a parallel investigation into the fraudulent use of a credit card belonging to the deceased woman.

“Our investigation thus far has allowed us to look into both incidents involving the murder and the credit card scam,” commented Wellington.

“Two male persons of interests are now in custody, who we believe can assist us with our investigation. We are awaiting a post-mortem report this week to determine the cause of death, and we are also awaiting a report from the fire department. We want to assure residents, family members, and the international community that the police are doing everything possible to bring the guilty ones to justice, and to restore calm to the peaceful community of Mount Pleasant,” he added.

The bodies of 74-year-old Alford Anderson and his 71-year-old wife Florence, both returning residents from Manchester, England, were found dead shortly after 1:30 p.m. on Friday, June 22, 2018, with multiple injuries.

There was also an arson attack at the premises.

Investigators theorise that the Andersons were killed so as to thwart the credit card fraud investigation.

It is reported that approximately $8 million were withdrawn from an account belonging to Mrs. Anderson.

Meanwhile, the Police High Command, in a statement this afternoon, expressed regret at the killing of the retirees and assured that the top-level investigation will continue with alacrity and the highest level of professionalism.

The police are appealing to anyone with information that can assist in the investigation to contact the Major Investigation Division at 876-967-2353, CIB HQ 876-929-9265, Police 119 emergency number or Crime Stop at 311.

Persons may also give information by using the Stay Alert App.