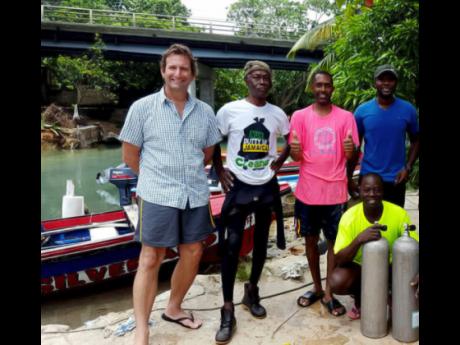 "The ocean is the most powerful force on the planet," says marine scientist, conservationist and explorer Fabien Cousteau.

Indeed, it is so powerful that life depends upon it.

In Jamaica and globally, the living coral is an endangered species, threatened by climate change impacts and pollution of all kinds. Most people may not see it with their own eyes, but fishers, divers, and all those whose livelihoods depend on the sea are fully aware of the stresses endured by coral reefs.

While it may seem that the odds are firmly stacked against the reefs' survival, there are many bright signs of hope. Around Jamaica, efforts are being made to protect the marine environment and thus, coral reefs.

The White River Marine Association in St Ann is one of those taking practical steps to protect what is left, rebuild the reef and rebalance its incredibly diverse and valuable ecosystem.

With grant funding from the Environmental Foundation of Jamaica (EFJ) under the Special Climate Change Adaptation Fund (SCCAF), the association is now working at the community level with fishers, community groups, local hoteliers, and small business owners in and around White River to rebuild the reef.

The need is urgent, with the local catch having declined by an enormous 600 per cent since 1950, with coral reef coverage down 85 per cent since 1970. The fishing community itself approached the group for help, seeing their catch continuing to dwindle.

The goal of the EFJ-funded project was to delineate a protected marine area of around 150 hectares. Fifty buoys now mark out the boundaries. Within this space, divers are acting as "coral gardeners", setting up five coral nurseries to date.

Once a month, they visit the coral to do maintenance, picking off the algae by hand and checking on the progress of the delicate young coral. 1,000 corals are now growing in the five nurseries.

That is not all. In the first of five planned phases, a training programme is under way for local fishermen to become wardens, coral gardeners and diving guides. With the assistance of the Oracabessa Foundation, 12 fishermen and 3 coral gardeners have been trained to date, including local spear fishers.

"The Environmental Foundation is very pleased to support this project, which has provided new employment options, while improving and enhancing the tourism product," said Barrington Lewis, Executive Director of the EFJ.

2018 is the Third International Year of the Reef, an effort by the International Coral Reef Initiative to raise awareness of the significance of our coral reefs. The aim is also to encourage partnerships between government, private sector and non-governmental organisations.

In Jamaica, this is a partnership that is already beginning to bear fruit, as the White River coral gardens, in time, come into full bloom.