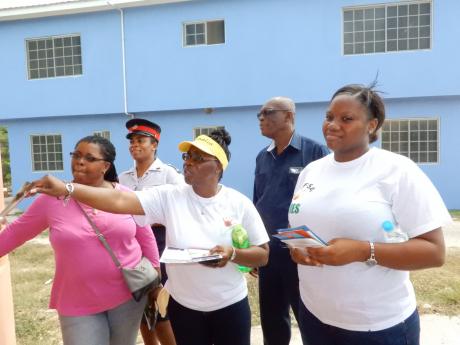 Cecelia Campbell-Livingston
Officials of several agencies during a tour of the Clarendon southeast community of Rose Hall last Tuesday.

Resident of Clarendon southeast community of Rose Hall, which sits between the better-known communities of Free Town and Sandy Bay, are appealing to the authorities to come to their aid, and come urgently.

The community is home to a large number of unattached youths, some unable to read, and the residents say there is a need for social intervention to prevent these mainly young men from turning to a life of crime.

During a walk-through of Rose Hall last Tuesday, representatives of the Clarendon branch of the Police Community Safety and Security Branch, the Social Development Commission and the Child Protection and Family Services Agency (CPFSA) were met by residents worried that the community is on the verge of adding to the crime statistics in the parish.

Floyd Smith, president of the Free Town Community Development Committee (CDC), said a lot of the young people in Rose Hall dropped out of secondary school long before getting into fifth form, and even those who made it all the way emerged with no passes in external exams.

"They need something like a HEAR Trust/NTA class implemented in the community, as many of the young people are not able to even find the fare to go to the various institutions," said Smith.

She warned there is "clear and present danger" facing the community as there are a lot of idle hands, with the youths unable to find jobs or to be properly engaged in training activities.

Smith added her voice to others in Rose Hall calling for a community resource centre to be established in the area to engage the young people.

"There has been no form of intervention programme, but what we do we try to engage them while they are on the corner playing football. We talk to them and invite them to club meetings," said Smith.

According to the CDC president, she has been having little success getting the unattached youths out to the club meetings, as they claim they do not see anything happening for the community, nor anyone coming around to address their plight.

She argued that while the shooting incidents and many reports of break-ins in the area have declined in recent weeks, this could change quickly.

"That's why we need to get them engaged before we have another flare-up," said Smith.

Other residents used the walk-through to complain about the lack of proper amenities such as water and streets lights in the community.

"We have to walk for over half-hour to the standpipe at the border of Free Town and Rose Hall," said one resident who didn't want to be named.

Nicola Bloomfield, who recently moved to the community, added her voice to those of residents who have lived there for decades.

"I hardly leave the house, I don't feel comfortable. There are too many idlers hanging around. They need something here to engage them. At the end of the day when crime hit, then it will be adding to the crime and violence in Clarendon," warned Bloomfield.

But councillor for the area, the Jamaica Labour Party's Carlene Benjamin, told The Sunday Gleaner that on more than one occasion she has tried to get the unattached youths involved in training programmes, but her contact on the ground has reported to her that there were no takers.

According to Benjamin, she is aware of children in the community who are not going to school and she has tried, several times, to get the matter addressed without success.

"From Sandy Bay to Free Town, I have personally spoken to the CDA (CPFSA), submitted the names of two young girls in particular, and to date nothing has been done," said Benjamin, as she argued that many of the children not in school either don't have birth certificates or their parents just don't care.

Benjamin said based on the cries for help from the residents, she will be going to the community "to really see if it is the people not interested or they weren't approached about training opportunities".

Rose Hall is in the constituency represented by the Jamaica Labour Party's Rudyard Spencer.