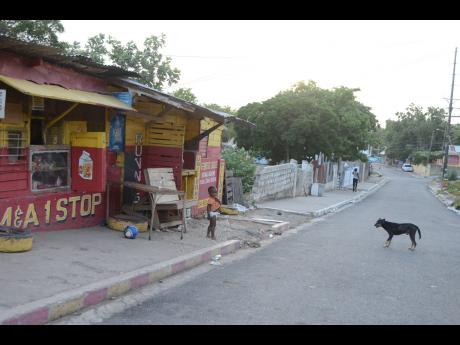 The community of 'Top Temple' around Glasspole Avenue in Rockfort, east Kingston, was in mourning last week after a man stabbed his brother to death last Wednesday night, traumatising residents who looked on.

The residents told The Sunday Gleaner that 23-year-old Akeem Wilks was involved in a dispute with his brother, who he claimed had worn his new merino without permission.

The two reportedly drew knives and started stabbing at each other as other relatives and residents tried to separate them.

According to the reports, the dispute started inside the family house about 9 p.m. and spilt on to Glasspole Avenue as it escalated. Wilks was then chased and stabbed in the neck and head by his brother, whose name is being withheld.

INVITED TO LIVE WITH THEM

According to the residents, the brothers shared the same father but had different mothers. Wilks reportedly invited his brother to live with him and his mother after things were not working out for his sibling in Clarendon.

"Him ran away from Clarendon come here and him brother take him up and him come and kill the woman one pickney," mourned Arlene Thompson as she pointed to blood stains on her shop walls, last Thursday.

"Akeem have a three-year-old daughter, and the little girl stand up right here so and watch her uncle a kill her father. There was blood everywhere, and when him move him hand from him neck, it just a spray out so," said Thompson.

"Everybody feel it for that youth because everybody loved him. They don't have anything bad to say about him," continued a distraught Thompson.

Last Thursday, young men in the area said that they saw what was happening but could not have intervened in the fight.

"You can't part people if them swinging knives, especially two brothers. He will say that you are trying to stop him from kill him brother and turn on you," said one male resident.

"We always try to part or stop the fight dem, but last night (Wednesday), when you see knife a swing, we can't stop that," offered another young man.

Last Friday, the police reported that the accused brother, who residents said was also injured in the fracas, had been taken into custody.