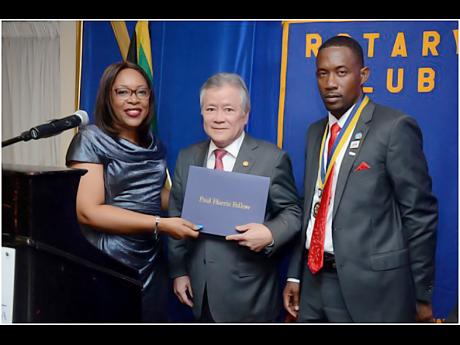 In recognition of his contribution to nation building in the areas of business and philanthropy, Gary Craig Hendrickson, chairman and chief executive officer of Continental Baking Company Ltd, more popularly called 'Butch', was, last week, bestowed with the Paul Harris Fellow Award by the Rotary Club of St Andrew.

The Paul Harris Fellow Award is issued by Rotary International in recognition of Rotarians who have made signification contributions to the Rotary Foundation. It is also awarded to non-Rotarians who have given significant humanitarian service. The award is named in honour of the founder of Rotary, Paul Harris, and is the highest Rotary award.

Hendrickson actively parti-cipates in programmes focused on education (from early childhood to tertiary) and local manufacturing in Jamaica and is also a major contributor to charities such as Mustard Seed Communities, Laws Street Trade Training Centre, Food For the Poor, and St Patrick's Foundation, among many others.

`The event was the Rotary Club of St Andrew's Annual Installation Banquet held at the Jamaica Pegasus Hotel last week Tuesday, where economist Kemmehi Lozer was installed as the club's 52nd president.

As keynote speaker for the event, Hendrickson's address to the audience called for an end to tribalism. According to Hendrickson, "Tribalism can perhaps best be summarised as loyalty gone amok to the point where that loyalty, a positive, noble characteristic, degenerates into a socially destructive and self-destructive force."

The event was also a fundraiser to support the Rotary Club of St Andrew's early childhood development project for 2018-19.