US impact on international trade policy in the Trump era 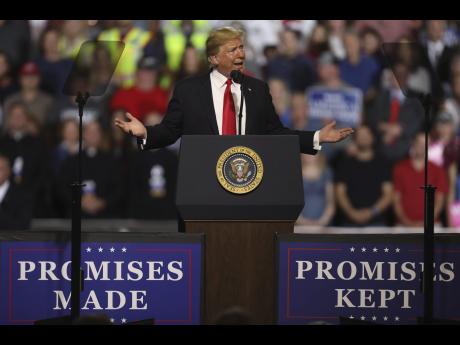 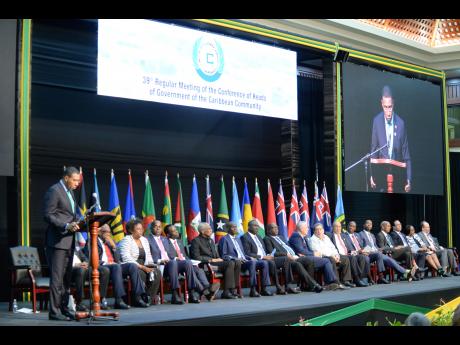 Lionel Rookwood/
It is hoped that the relevant CARICOM bodies, who met in Jamaica last week, have been mandated to undertake a proper analysis of this changing trade environment, its implications and regional responses. 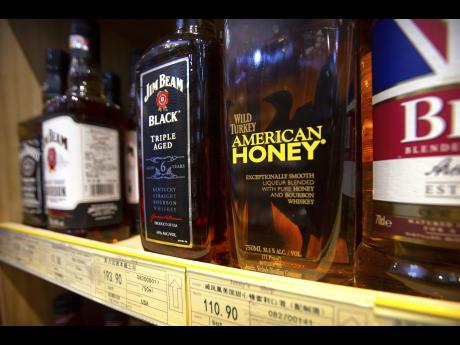 AP
Whiskeys distilled and bottled in the US are displayed for sale in a grocery store in Beijing. China's options to retaliate in an escalating trade dispute with Washington go beyond matching US tariff hikes to targeting American companies and government debt. Its state-dominated economy gives regulators tools to hamper sales of engineering, shipping and other services – an area in which the United States runs a trade surplus – and to disrupt operations for automakers, restaurant chains and other American businesses in China. 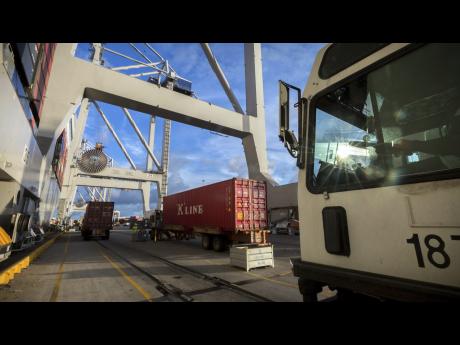 AP
Jockey trucks line up to under massive post-Panamax cranes to unload their 40-foot shipping container at the Port of Savannah in Savannah, Ga. The United States and China launched what Beijing called the "biggest trade war in economic history" on Friday, imposing tariffs on billions of dollars of each other's goods amid a spiraling dispute over technology.
1
2
3
4

United States President Donald J. Trump, Republican, with his 'America First' policy reflecting a penchant for protectionism, seems intent on applying a wrecking ball to the neo-liberal international trading system, which the US was instrumental in building in the 72 years since World War II.

In 1930, to stem foreign competition, Republican members Senator Reed Smoot and Congressman Willis Hawley championed the protectionist Smoot-Hawley Tariff Act, imposing tariffs on 20,000 imported goods. America's trading partners retaliated, imposing tariffs on US exports. The general view has been that the ensuing 'trade war' exacerbated the recession - the Great Depression. The dire economic conditions, conducive to the rise of right-wing populist parties and their extreme ideologies, contributed to the outbreak of World War II.

At the end of the war, the US and other victors resurrected a 1927 League of Nations proposal for the progressive liberalisation of trade. The UN Conference (UNCTD) on Trade and Employment was convened in Havana, Cuba, 1947-1948. Although the US withdrew from the proposed International Trade Organization (ITO), the General Agreement on Tariffs and Trade (GATT) survived. Successive GATT rounds of trade negotiations led to significant tariff reductions, facilitating expansion of global trade.

From 1952 onward, the US Republican Party supported free trade and promoted the interests of the business community. There is hardly a free-trade agreement signed and implemented by the US that has not been overwhelming supported by the Republicans. Through the years, the US has been aggressive in seeking the opening of foreign markets for its exports. President Ronald Reagan wanted trade to be free, open and fair, considering protectionism destructive.

He supported the launch of the GATT Uruguay Round in 1986, which introduced rules for trade in services; expanded coverage of trade-related issues, for example, intellectual property rights, and established the World Trade Organization (WTO). US trade policy was reinforced by its domestic trade laws (e.g., Section 301 of the Trade Act), enabling unilateral action against trading partners.

POLICIES THAT FLOURISHED WITH US SUPPORT

Globalisation, downsizing and outsourcing are policies that flourished with US support. These policies, with technology application, saw US companies expanding overseas while consolidating at home. In developed countries, including the US, there was movement into services with heavy manufacturing sited in developing countries benefiting from cheaper labour.

The presidencies of George H.W. Bush and George W. Bush supported the North America Free Trade Agreement (NAFTA) and the Free Trade Area of Americas (FTAA). The US also pressed for new WTO negotiations leading to the 2004 launch of the Doha Round. As the round lagged, the US and other developed countries commenced negotiating even more comprehensive and complex free-trade agreements outside of the WTO. Thus, the US joined the Trans-Pacific Partnership (TPP) and commenced negotiating a Transatlantic Trade and Investment Partnership (T-TIP) with the European Union (EU).

More pressure was also brought to bear on emerging developing countries, such as Brazil, China and India, to further open their markets to imports of goods and services from the US and other developed countries.

Developing countries, with support from non-governmental organizations, protested the deepening trade liberalisation and globalisation and restrictions on their ability to determine national trade policy. Recall the conflagration at the 1999 WTO Seattle Conference and disruption of the 2001 Quebec Summit of the Americas. However, the discontent within developed countries, which led to Brexit and the election of Donald Trump, went under the radar.

Regarding imports, it has been in the interest of US corporations and consumers to have low tariffs on imported goods. Hence, the average applied tariff on all products is 1.61 per cent, and two per cent on industrial products. The US protects domestic industries by maintaining high tariffs on specific products such as textiles and clothing and leather goods. Non-tariff measures, for example, subsidies, are also used to protect interests in agriculture on products such as sugar. Note that Jamaica has been negatively impacted by US measures to protect its textiles and clothing industry and sugar producers.

TARIFFS ON ALUMINUM AND STEEL

The US has now said that it needs to protect its steel and aluminium industries in the interest of national security. Note that the US has not favoured this justification from other countries and has frowned on such policies as national food security. In March, President Trump announced that tariffs of 25 per cent would be placed on all imported steel and 10 per cent on imported aluminium. Some countries were exempted. Canada, Mexico and the EU had an exemption up to May 31. On June 1, the tariffs were applied on these countries.

A trade war has been initiated as the exporting countries are retaliating by imposing billions of dollars of tariffs on a range of US goods. Moving to dispute settlement, the countries have requested consultations with the US in the WTO.

The Trump international trade policy, America First, is unfolding with the imposition of tariffs on Chinese products, commencing with solar panels, et al; withdrawal from the TPP; renegotiating NAFTA; putting T-TIP on the back burner; putting tariffs on steel and the aluminium; lack of US engagement at the WTO and Organisation for Economic Co-operation and Development; and a feud with traditional trading partners and allies.

President Trump seems intent on dismantling the 72-year-old international trade regime built by the US and largely supported by the Republican Party. His position seems to be that the US would be better off acting unilaterally and bilaterally. The WTO and multilateral trade are not favoured. His entire focus is on fulfilling his election promises to his base supporters. For Trump, trade wars are good and winnable.

In March, the UNCTAD commented that trade wars are never in anyone's interest, especially developing countries'. If the 1930s Smoot-Hawley effect is a lesson, a trade war could do serious damage to the global economy. Recall that the UN Sustainable Development Goals (SDGs) are dependent on a healthy global trading environment for their implementation.

With globalisation and technology, we now live in an interconnected world. The aim has been to have developing countries fully integrated into global trade. Jamaica is a small, open, economy for which trade is critical and the US is the principal market.

History has shown that trade-policy shifts in the US can negatively impact Jamaica directly and indirectly. Currently, there is concern about the impact on the alumina industry of US sanctions on Russian companies, such as UC Rusal, and on the oil refinery (Petrojam) of US sanctions against Venezuela.

No one seems quite clear on what the specific impact of the Trump trade policy could be on developing countries. For one thing, there is no certainty or clarity to Trump policies. The president now seems determined to implement his policies, but his habit of wavering could see positions changed overnight by Twitter. Members of the Republican Party do seem to have concerns about his approach to trade.

GLUT IN THE MARKET

Some analysts seem to think that the tariffs on steel and aluminium could lead to a glut in the market, which could see lower prices for these products. On the other hand, a glut could lead to companies reducing production and restructuring. Any price gain could be short term.

Looking further into the future, other analysts see opportunities for developing countries in Trump overturning an international trading system that was foisted upon them. This would enable developing countries to strengthen domestic production and to look at further stimulating south-south trade. This might be a possibility in Asia, Africa, and Latin America but does not factor into the response of developed countries, including the US.

Members are apprehensive about a US withdrawal from the WTO undermining the organisation. Attempts at appeasement could see the WTO reverting to the GATT of old. This would seriously affect developing countries and take trade back to an era of cut-throat measures. While the WTO has its shortcomings, it still enabled developing countries to negotiate on more equal terms and to operate in a rules-based system. Bilateral or plurilateral negotiations put developing countries, especially small countries, at a disadvantage.

CARICOM heads took note of this issue at their meeting in Montego Bay, St James, held July 4-6. It is hoped that the relevant CARICOM bodies have been mandated to undertake a proper analysis of this changing trade environment, its implications, and regional responses. Jamaica, as chair of CARICOM and its prime ministerial sub-committee on external trade negotiations, has an opportunity to provide leadership in this area.