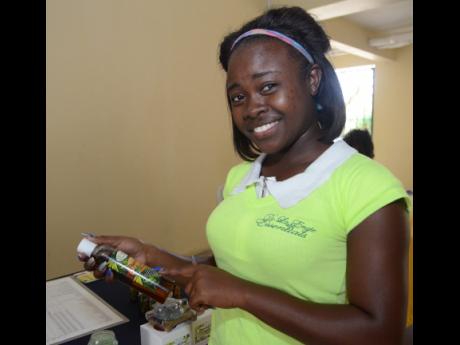 Kenyon Hemans
Anneila Mullings shows a product made from Jamaican ganja at the 3rd Annual Medical Cannabis Symposium held at the University of Technology recently.

The Cannabis Licensing Authority (CLA) is defending its stewardship of Jamaica's fledgling medical marijuana industry despite strong criticisms from several major players in the sector.

According to the CLA, its close marking of stakeholders is absolutely necessary and critical to the structured development of what is envisaged to be a potential multibillion-dollar industry.

"In executing its mandate there is a delicate balance that must be maintained as cannabis sativa, known to us as ganja, is still an illegal commodity if handled outside of our regulated regime.

"The role of the CLA in this partnership is to develop regulations in conjunction with the Ministry of Justice for the issuance and regulation of licences, permits and authorisations for the handling of hemp and ganja for medicinal, therapeutic and scientific purposes," chief executive officer of the CLA, Lincoln Allen, told The Sunday Gleaner.

Addressing the opening ceremony of the third Jamaican Medical Cannabis Integration Symposium at the University of Technology, last week, Allen argued that ambivalence among Jamaicans about the ganja plant adds to the challenges confronting his organisation.

As at the end of May, the CLA had issued 16 licences - three for processing, three for retailing and 10 for cultivation. But the CLA is empowered to issue 11 types of licences across five main categories. These are cultivation, transportation, processing, retailing, and research and development, ensuring coverage over the entire value chain for the medicinal marijuana industry.

Dr Henry Lowe, executive chairman of the Medicanja Limited, has taken issue with the CLA for granting his company a provisional licence, which he says is hampering its effort to ramp up commercial production of at least 12 therapeutic products approved by the Ministry of Health.

"We are here approved but can't get to move," Lowe told The Sunday Gleaner.

"The CLA tells me I have a conditional licence for therapeutics which I am the only person in Jamaica and the Caribbean doing. Everything is approved except that they have to put me in touch with a grower. It's in my interest to find a licensed grower but they want to do it and they want what is called a tripartite agreement where they are involved - foolishness.

"So they are holding up my licence on therapeutics. This has been going on from heaven knows when. I've been approved, met all the requirements about nine months and they say they must find a grower to link me. So I can't move," added Lowe.

He is adamant that he should be free to choose the licensed cannabis cultivator with whom he does business, subject to negotiations, as a normal course of business.

"I have to make sure that I find a licensed grower who can work with me to give me the quantities, otherwise I am wasting time," he insisted.

However, while refusing to comment on individual applications, Janene Chin, director of communications and research at the CLA, insisted that is consistent with its mandate to be directly involved in the movement and trade of cannabis material.

"This is to uphold the requirement for the legal movement of cannabis to be managed by the authority charged with the responsibility to do so, that being the CLA. As a consequence of this, the implementation of a closed loop system was deliberate in order to maintain full control of the industry.

"This becomes particularly important to satisfy our obligations in keeping with the international drug conventions that have been signed," said Chin.

The non-issuance of licences to transport medical cannabis has also be bee raised as a hindrance, but Chin dismissed this as unfounded.

That was underscored by Allen, who argued that the CLA's actions are rooted in an abundance of caution.

"One single mistake by someone who doesn't know care will compromise the entire industry. We cannot afford to be selfish. We need to work with the regulations that exist.

"It is not the time ... for us to argue as to who has the most rights to ganja or that little man is going to lose and the big man is going to gain. It is not that time. It is a time for us to work together with every single individual in an inclusive manner," said the CLA boss.