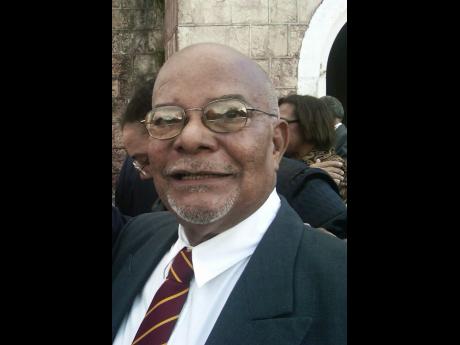 Barnett, affectionately called 'Barnie Rubble' by his students, was principal from 1979 to 1998. meaning the largest percentage of living alumni passed through the Heroes Circle gates during his tenure.

Steven Gooden, president of the Wolmer's Old Boys' Association, said Barnett was an old boy himself, graduating from Wolmer's in the 1950s and going on to pursue tertiary education at the University College of the West Indies (Jamaica) and Richmond College (London).

"He taught history at various educational institutions in Jamaica, the United Kingdom, Belize and Scotland, before returning to transform the noble institution that we are all part of today," Gooden said in a message to Old Boys'.

Quoting another former Wolmerian, Gooden said, "Mr Barnett was the definition of Wolmerian presence and poise. We all knew it, we all respected it and we all feared it because we knew it came from a pure place... ."

In the meantime, Wolmerian Bruce James, president of the world renowned MVP track club, who was a student during Barnett’s time as principal, told The Gleaner yesterday that he owes a piece of his success to Barnett.

“Mr Barnett was my headmaster. He not only appointed me prefect, but he also appointed me deputy head boy. Years later, when Stephen Francis, Paul Francis, David Riley and myself were helping the Wolmer’s Boys’ School track team, he was a big supporter of us," James said.

“We took the school to various track-and-field events, including the Penn Relays. When we decided to form the MVP track-and-field club, our very first training base was at Wolmer’s Boys’ School and that was thanks to Mr Barnett."