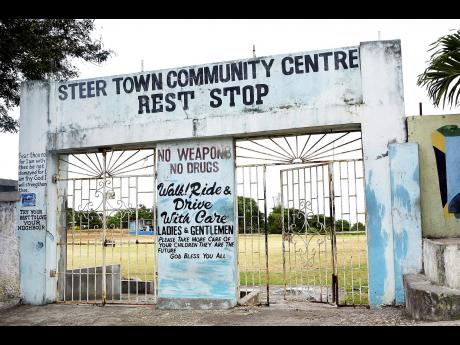 Lionel Rookwood
The Steer Town Community Centre which could be retrofitted to provide training for some unattached youths.

Unattached youths in Steer Town, St Ann, say they are trying their best to stay away from the gun, but unemployment and a lack of skills training are pushing them towards a life of crime.

"We want some youth programmes to go on in the place so that the youths them can learn a trade and get some work," said 'TT', a young man from the section of Steer Town known as 'Dam Head', where there is heavy support for the Jamaica Labour Party (JLP).

"The politicians dem already trick us say we should war with each other but we don't want that. We want work," added TT.

Gangsters from Dam Head have for years been at odds with gangsters from another section of the community called 'Green Bay', but the community has seen relative peace in the past year and the residents have expressed hope that this will continue for some time.

"Right now the poor people them up here want to regroup and come stronger. A lot of talented youths are here, and up here life is good. But we just want some work to uplift we self," continued TT.

According to TT, many youths in the community are uneducated and unemployed, and it needs the intervention of the administration which they support.

TT's call for opportunities for the youths was echoed by a group of women in the community who lamented the constant "rubbing out of them hand middle (preparing ganja for smoking)" by youths in the impoverished community.

One woman told The Sunday Gleaner that her teenage son has been out of school for the past year and is yet to find any meaningful employment.

He has since left the community in an effort to avoid becoming involved in illegal activities.

"If the youths them get some training they will be better off, but a lot of them, like my son, just come out of school and just sit down here every day not doing anything.

"It's not that them don't want to work, but that is how them get involved in all kinds of foolishness," said Sheron Jackson, a resident of Green Bay.

Last week, councillor for the Lime Hall division, which includes Steer Town, Genevor Gordon-Bailey, told our news team that employers were staying away from the area because of the rampant shootings and killings that were taking place there.

She said since the peace in the area opportunities have been opening up for the youths.

"A lot of young men are getting work. Before this no one was employing anyone from Steer Town. Back then we had a real problem but we have been trying," said Gordon-Bailey.

She charged that in recent months dozens of youths from the area have found employment at hotels in the parish.