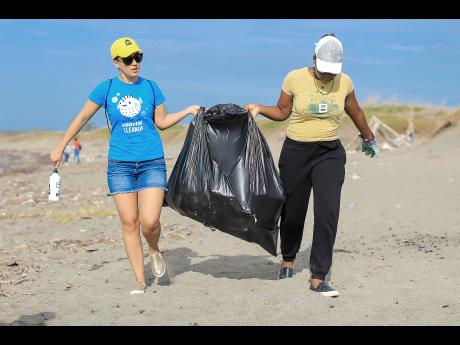 Contributed
JET CEO Suzanne Stanley (left) and a beach clean-up volunteer remove a bag of garbage from the beach. 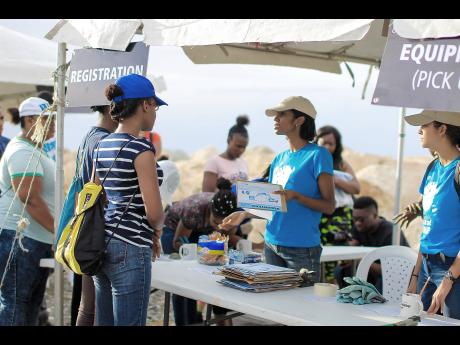 Contributed
Tamoy Singh Clarke (centre), JET programme director, registers volunteers at the launch of ICC Jamaica2018 on Monday at the end of the stone revetment on the Palisadoes in Kingston. 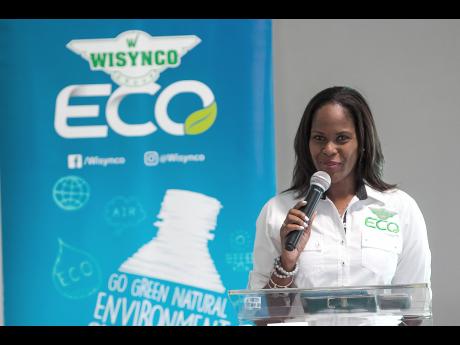 WITH Monday's clean-up of the Palisadoes, the Jamaica Environment Trust (JET) has kicked off activities for this year's International Coastal Clean-up (ICC) to be celebrated officially next month.

After clearing some 280 pounds of waste from the coastline along the stone revetment on the Palisadoes main road, JET is intent on getting Jamaicans enthusiastic about ICC 2018, building on their own efforts to tackle pollution over the years as well as other recent efforts, such as the Wisynco Eco Recycle Challenge.

She added that this was especially important given the volume of garbage collected over the years on ICC day alone. For example, data from ICC day last year revealed that 9,675 volunteers at 147 sites had collected garbage weighing over 160,000 pounds.

"It is also an opportunity to raise awareness about issues related to solid waste management and garbage in our oceans, and a reminder for us to Nuh Dutty Up Jamaica," Stanley added.

Her sentiments reflect those of environmental communication officer at Wisynco, Shelly-Ann Dunkley, when she spoke to The Gleaner at the start of the Wisynco Eco Recycle Challenge seven weeks ago.

While congratulating JET on its now 11th hosting of ICC, Dunkley also revealed Monday that Recycling partners of Jamaica are on the verge of securing approval from the Government for an industry-led approach aimed increasing investment in recycling on the national level.

She has also encouraged Jamaicans to take lessons learnt on ICC day a step further and begin recycling their plastic waste.

Started in 1985 by the Ocean Conservancy in the United States, ICC is the largest one-day volunteer event in the world. During ICC, millions of volunteers in more than 100 countries clean up beaches and waterways to raise awareness about marine pollution.

In 2017, Jamaica ranked as the 12th largest ICC event in the world and represented the largest ICC turnout in the English-speaking Caribbean.