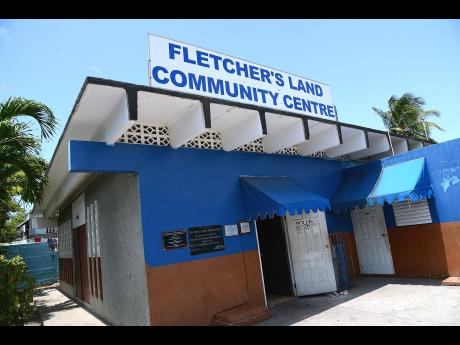 Members of two clubs in the west Kingston community of Fletcher's Land are livid over a decision to bar them from meeting inside the Fletcher's Land Community Centre unless they pay the full fee charged for the use of the facility.

"The Fletcher's Land Management Benevolent Society banned us since June last year. They are claiming that it is because of light bills and maintenance fees, and that there is rivalry between the two youth clubs," charged Kimani Martin, president of the Fletcher's Land Youth Motivators Club.

"They are saying that there is only need for one youth club at the centre and that our club is a duplication of the Police Youth Club. But there is no overlap between the two youth clubs. They have separate mandates and both are needed in the area for the youths," argued Martin.

He said the Fletcher's Land Management Benevolent Society is an umbrella group formed five years ago, which holds oversight responsibility for all the clubs in the community and for the maintenance of the community centre.

According to Martin, the benevolent society is asking the Youth Motivators and the Senior Citizens' clubs to pay a $7,000 fee whenever they want to use the community centre to host a meeting.

That is the fee charged generally for the use of the facility, and Martin argued that it is unreasonable as his members cannot find that money each week to hold general meetings.

But chairman of the benevolent society, David Allen, said it has no option but to impose the fee on the two clubs as the money is needed to maintain the facility.

"When we rent the centre we get money for that, and that is what sustains the place. We don't have anybody that really funds us now," Allen told The Sunday Gleaner.

He said the Citizen Security and Justice Programme (CSJP) once provided the benevolent society with $25,000 monthly for administrative support, but that funding ended in June 2017.

"So they (club leaders) were told that if they are going to pursue their group as an organisation that they own and operate, they must tell us how they are going to afford the cost of operating here," added Allen.

According to Allen, while the standard fee is $7,000 to use the facility, he has invited the leaders of the two affected clubs to negotiate a long-term cost for using the centre, but they have not taken up the offer.

"We have had several meetings, but their position is simply that they want us to absorb the cost of them operating, and it's the same situation for the senior citizens ... it is not something that we can accommodate," declared Allen.

That position has been rejected by coordinator of the Senior Citizens' Association, Alton Banbury, who said his elder members, many of whom live near the centre, have to walk a long distance to a church for meetings.

"The senior citizens' club keeps meetings in the evenings so we are not there until in the night, so we can't be running any costs. The chairman does not pay any light bills for the place," argued Banbury.

He claimed that a number of government entities contribute to the cost of the utilities of the centre.

"It is just that the chairman of the benevolent society does not like us, and that is why he is doing those things," said Banbury, as he alleged that their Member of Parliament Desmond McKenzie has sided with the benevolent society, and called for the intervention of Prime Minister Andrew Holness.