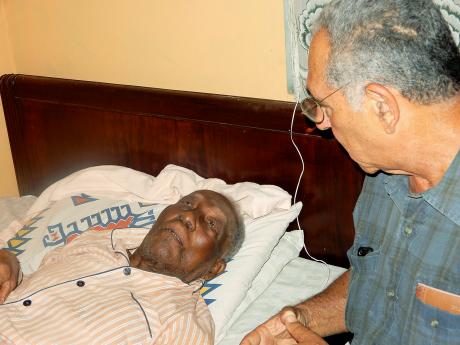 Cecelia Campbell-Livingston
Custos of Clarendon William Shagoury visits centenarian Howell Burke at his house in Rock River, Clarendon, on the eve of his 107th birthday.

Rock River, Clarendon, resident Howell Burke will celebrate his 107th birthday today, but he is adamant that this is no big deal and he doesn't want a big celebration.

"I don't want anything special, you nuh haffi make a big deal out of it," Burke told The Sunday Gleaner.

But after being told that a party is being planned to observe his special day, Burke demanded that his favourite meal, "curried goat and bananas", should be on the menu.

If there is a secret to his longevity, then the only thing Burke can think of is the fact that as a child he never consumed fertilised ground produce, and this habit followed him into adulthood,

"Let me tell you something. I grow up and my father didn't know fertiliser you know, and he was a farmer. Years in the police force and I have never eaten fertilised food, that might have been one of the reasons why I live so long," said Burke,

He started his working life as a teacher and stayed in the classroom for several years before joining the Jamaica Constabulary Force (JCF) in 1939. He retired from the JCF on his birthday in 1971, and said if there was any regret in his life it is that he didn't join the force earlier.

"My mother was upset when I left the teaching profession, but I eventually managed to make her laugh and be happy about it (joining the JCF)," declared Burke.

While in the JCF, he was caught up in the infamous Coral Gardens, St James, incident in 1963, and he describes it as "cheating death by the skin of my teeth".

In that incident, eight persons, including two members of the JCF, were killed during a clash involving members of the Rastafarian community and the cops.

In April last year, Prime Minister Andrew Holness apologised to the Rastafarian community for what he described as "brutality, oppression and injustice" of Coral Gardens and promised them compensation.

Responding to Holness' apology, Burke said he was not sure why the prime minister felt the need to apologise.

"If he thought it fit to apologise, so let it be. All in all, there was no apology there. I don't see where there was an apology, he did nothing wrong," said Burke.

Today, the centenarian will enjoy his day with family and friends from the community, including Custos of Clarendon William Shagoury, and Burke is just taking one day at a time while embracing life.