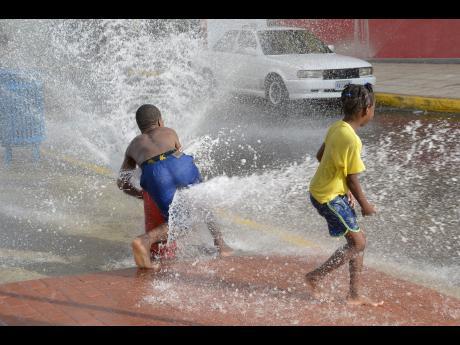 Children beating the heat at an open hydrant in downtown, Kingston - File photo

The heat being experienced in sections of the island is expected to continue into September.

The Meteorological Service of Jamaica says based on the current seasonal forecast, there is a 55 per cent probability that temperatures in August to September will be warmer than normal.

“There is also a 25 per cent probability for temperatures to be normal,” the Met Office said in posts on Twitter.

It said over the past three days temperatures in Montego Bay, St James and in Kingston have been around 34 degrees Celsius.

The Met Office, however, dismissed claims that Jamaica is experiencing the Equinox Phenomenon, which is when sun’s position in relation to the earth provides 12 hours of sunlight twice per year in March and September.

During the period, temperatures may reach 40 degrees Celsius and could cause sunstroke and dehydration.

The Met office said claims being circulated about the phenomenon are not true.

"Although the concept of the equinox is real... this phenomenon is not currently been experienced," it noted.