NEPA to get tough on persons who harm protected species 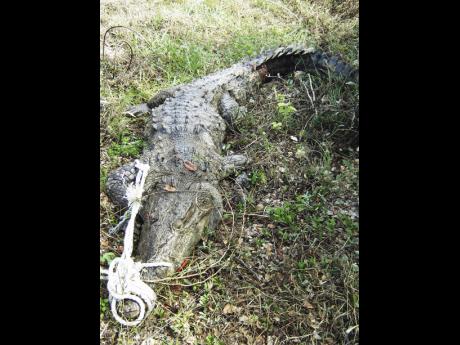 Contributed
NEPA has listed the top four endangered species that are most frequently targeted by Jamaicans as crocodiles, turtles, snakes and the yellow-billed parrot.

The National Environment and Planning Agency (NEPA) last week issued a warning to individuals who kill, capture or maim the island's protected animals, noting that violators could face jail time or heavy fines.

Two men were arrested last week for killing a turtle in Bull Bay, St Andrew, in July. They join 17 other persons charged since 2015 for violating the Wildlife Protection Act (WLPA), and NEPA believes that number could be much higher if Jamaicans were reporting instances of cruelty against wild animals.

Morjorn Wallock, director of legal and enforcement at NEPA, said the agency will be vigilant in enforcing the law and asked for help from law-abiding citizens.

"Protecting Jamaica's natural resources is fundamental to the agency's mandate. NEPA will continue to expend its best efforts to ensure compliance with the nation's environment and planning laws. We will do this through continued public education."

NEPA has listed the four endangered species that are most frequently targeted by Jamaicans as crocodiles, turtles, snakes and the yellow-billed parrot. The agency could not say, however, how many of these animals were reportedly harmed in recent years.

"It is a challenging task to track all individuals throughout the length and breadth of Jamaica who are in breach of the Wildlife Protection Act and other environmental and planning laws," said the agency in response to queries from The Gleaner.

"The task is made easier, however, as a result of our collaboration with partners, including the Jamaica Constabulary Force, non-governmental organisations, and most importantly, the nation's citizens," added NEPA, as it noted that the video of the turtle's killing that was posted online greatly helped its investigation.