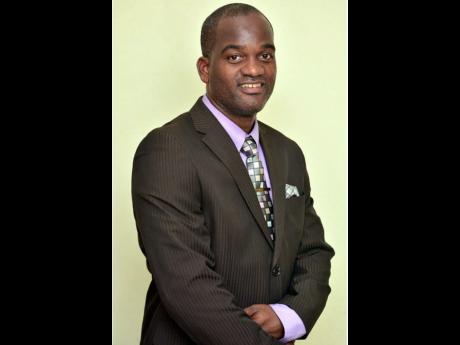 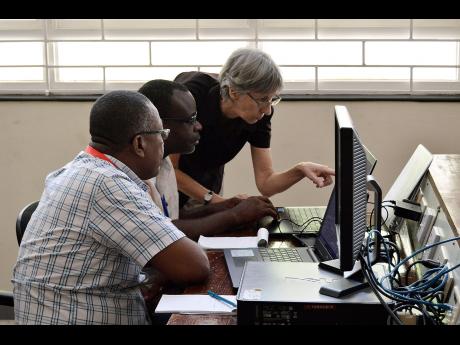 Contributed
Participants at the recent CSM workshop are intent on their training. 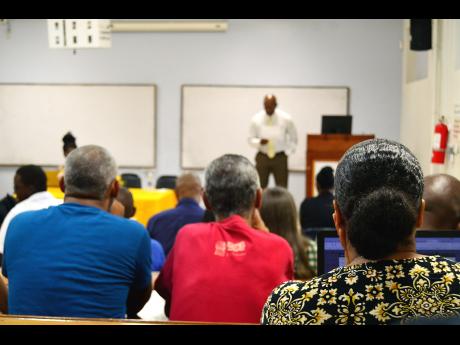 Contributed
These trainees are all ears at the recent CSM training held in Kingston.
1
2
3

The climate-change threat to food security has left Jamaica and the Caribbean in search of an effective response to safeguard their ability to feed their people over the long term, and it appears they have found one.

It is called crop simulation modelling (CSM) and is championed by Jamaican researcher Dr Dale Rankine, who made it the primary focus of his PhD, which earned him high commendations and was awarded the best thesis in the science category for 2014/2015.

CSM also appears to be gaining ground among others in the region, including Jamaica's Minister of Industry, Commerce, Agriculture and Fisheries Audley Shaw. For Rankine, there is little wonder why.

"To do modelling on agriculture, crop simulation modelling is the leading approach. What modelling does is allows you to experiment with a number of different options to see how your production changes under different conditions," he told The Gleaner.

"If you think in terms of any long-term crop, like yam, for example, yam is a one-year crop. If I farm yam in Trelawny and you came to me and said, 'Dale, I want to farm this yam in St Elizabeth', you would have to farm the yam in St Elizabeth and wait for it one year to fail or to succeed to know how it will do," Rankine added.

"What I can do with CSM, after I have grown a variety in one or two locations for at least two seasons, is to model the parametres that mimic what the growth is in the field to see what I get. It is a very powerful tool and the most economic means of assessing your productivity under a range of different conditions," Rankine said further.

AquaCrop, developed by the Food and Agriculture Organisation (FAO) to address food security and assess the effect of the environment and management on crop production, is one such tool. There are, too, software packages, including the Decision Support System for Agro Technology Transfer (DSSAT), which comprises crop simulation models for more than 40 crops.

DSSAT is supported by a range of utilities and applications for weather, soil, genetic, crop management, and observational experimental data and includes example data sets for all crop models. Among the 40 crops are many that are grown in the Caribbean, including sugar cane, cassava, tomato, Irish potato, peanuts, and pineapple. Others include rice, soy beans, chick peas, dry beans, potato, sweet dasheen, sunflower, sweet pepper and cabbage.

Both the FAO's AquaCrop and DSSAT were the subjects of a recent training workshop in Jamaica, which was primarily supported by the Adaptation Programme and Financing Mechanism of the Pilot Programme for Climate Resilience (PPCR) Jamaica, which is financed through the Inter-American Development Bank.

Rankine has himself undergone training in DSSAT on a number of occasions and is passionate about sharing his knowledge. He does so as the agricultural climate modelling research analyst with the PPCR.

The recent Jamaica workshop brought together more than 20 stakeholders, including agrono-mists, agricultural extension officers, agro-meteorologists, farmers, and researchers, for both basic and advanced training in DSSAT and AquaCrop. Participants were drawn from not only Jamaica, but also Barbados, Belize, Guyana, St Lucia, St Vincent and the Grenadines, and Trinidad and Tobago.

Rankine is now seeking to have tangible results from the training sessions, beginning with the establishment of the Caribbean Consortium of Crop Modellers, formed with a Whatsapp group and an email group, following CSM training done in Trinidad in April.