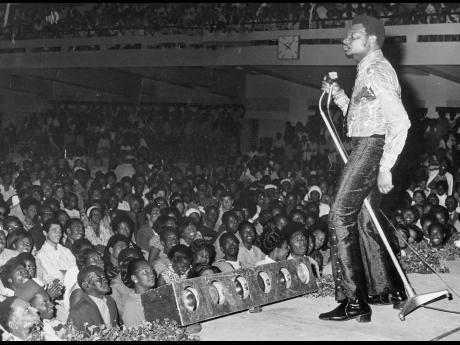 Gleaner photograph
Count Prince Miller electrifying his audience at the April Easter Extravaganza at the National Arena in 1971.

Legendary entertainer of the stage and film Clarence 'Count Prince' Miller passed away in London, England, yesterday at age 83. He had been ailing for some time before his illness from cancer took a turn for the worst earlier this month.

He was a giant of Jamaican entertainment. Whether it was for his iconic record Mule Train, for his pivotal role in the ground-breaking Caribbean Music Festivals at Wembley in 1969 and 1970, his association with James Bond movies, or a score of musical, compere or acting activities in numerous countries, Miller was at the core of Jamaican entertainment for over six decades.

Clarence Linberg Miller was born in Port Maria, St Mary, in March 1935. Although he trained to be a laboratory assistant, Count, as he was known from a young age, decided that his future lay in music. He was determined to keep going, even though he failed his first big opportunity at one of Vere Johns' celebrated talent auditions.

Eventually, Count Prince Miller moved to London with Jimmy James and the Vagabonds in the early 1960s.

"Count Prince Miller had a stature, a voice, a humour that made him the quintessential showman. He was a recording artiste and an actor of note with the James Bond film 'Dr No' and the iconic record Mule Train among his work," said Minister of Culture, Gender, Entertainment and Sport Olivia Grange.

"He was one of the greats, and I thanked him for his role as one of the pioneers who took the music of Jamaica to the world."

She continued, "Only recently, he was a part of history when he played the role of grandfather in the first nationwide television advertising campaign in the United Kingdom to feature an all-black family.

He was a proud Jamaican, and we are very proud of the way he represented our country on the world stage."

Count Prince Miller is survived by his son, Jean-Pierre Miller.