ICWI Hope In The Hills concert raises $750,000 to fight cancer 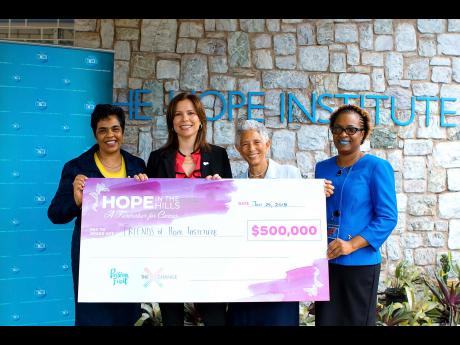 Contributed
Dr Dingle Spence, Senior Medical Officer at The Hope Institute and Jacqueline Downy, Ward Manager, The Hope Institute are presented with a cheque from Valerie Reynolds Chairperson of the ICWI Group Foundation and Samantha Samuda ICWI Vice-President of Marketing and Human Resources. The funds raised at the Hope in The Hills Concert.

The Hope Institute of Jamaica and the Jamaica Cancer Care and Research Institute (JACCRI) were the beneficiaries of $750,000 from the recently held ICWI Hope In The Hills concert.

The brainchild of local singer and songwriter the late Suzanne Couch, the concert became a reality on Sunday, June 10, at Strawberry Hill, St Andrew. Grammy-winning singer Joss Stone headlined the event with Suzanne and her daughter Sarah, who also performed. Couch lost her battle with cancer just a few weeks after the concert.

Senior medical officer at the Hope Institute of Jamaica Dr Dingle Spence, who accepted the funds, noted the positive impact the donation will have, noting that it will be critical to the advanced training of personnel from the institution.

"One of our main needs is to promote the education of our own staff because we are emerging as a centre of excellence, and we need to make sure that our own staff are educated. We will be sending them abroad to do short courses to expand their learning. We are also seeking to bring experts down to train our people in Jamaica," she added.

Spence lauded the efforts of the organisers and sponsors for supporting the fight against cancer.

"It doesn't matter whether you're a millionaire or you earn a dollar a day, cancer can affect anyone. Corporate involvement shows we are supported by the community, and so, it's heartening to see ICWI and corporate Jamaica working with us in this manner," said Spence.

In addition to the training of personnel, the funds from the concert will be used by JACCRI to ensure inclusion of Jamaicans in cutting-edge cancer research and in conducting their own research into prostate and breast cancer.

The vice-president of marketing and human resources of title sponsor ICWI, Samantha Samuda, expressed gratitude at the level of support the event received by Jamaicans.

"ICWI is committed to the fight against cancer, so when we were asked to support the concert, the company was happy to step in. ICWI would like to thank every single person who bought a ticket to the event. Your contribution to an affected person's life is immeasurable," said Samuda.

Hope in the Hills promoters Laura Marley, director of Passion Fruit Agency, and the principals of The Xchange Culinary Management & Marketing, Erin Mitchell and Kimberly Dunkley, are looking forward to hosting the event again.

"Being a part of this concert has exposed us to the many financial costs associated with this disease, so we want to continue with this concert as the impact of donations from the event is far-reaching," the promoters collectively noted.