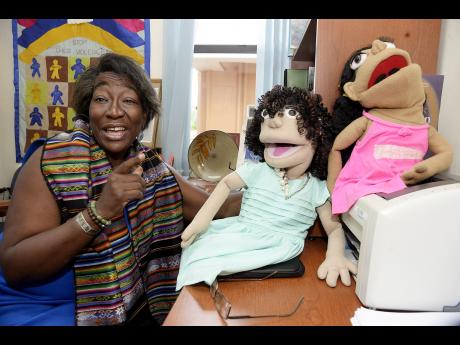 After working with traumatised children for decades, clinical social worker Dr Claudette Crawford-Brown is convinced that play therapy is the perfect anecdote for healing the wounds being experienced by those who are exposed to a myriad of social ills on a daily basis.

Crawford-Brown, who is a senior lecturer in the Department of Sociology, Psychology and Social Work at the University of the West Indies (UWI), Mona, uses puppets to educate children about varying issues.

With the help of her sidekicks she helps children to deal with issues such as bullying, migration, lotto scamming, and human trafficking.

"I am convinced that this form of intervention, using play therapy, is one of the things that is often lacking in our arsenal of tools that we use with Jamaican children," said Crawford-Brown.

"Our children go through 10 times the amount of trauma on a regular basis than children in other parts of the world, and that trauma is being experienced as early as ages three, four and five," she told The Sunday Gleaner.

A 30-year study of Jamaican children, which was released last week, concluded that spending time to play with children could yield positive results.

The study which is titled, 'The Jamaica Home Visit Intervention: 30-Year Study of the Impact of Early Intervention on Adult Ability and Success', was conducted by a team from UWI's Caribbean Institute for Health Research - formerly the Tropical Medicine Research Institute.

According to the decades-long study, children whose parents spent time to play with them have a better IQ, better mental health, high self-esteem and earned better salaries as adults.

Crawford-Brown was recently recognised by her department for 38 years of service and will be retiring from the university soon. She intends to focus her energy on teaching professionals how to use play therapy as an intervention when dealing with traumatised children.

"I was thinking of where I need to go, and this is where I am going. I am doing more work on qualifying, or accrediting, or licensing, more of our professionals like social workers, guidance counsellors, etc, with skills and certificates in play therapy, so that they can be better able to reach our children," said Crawford-Brown.

The clinical social worker is best known for her work with 'barrel children', and last December was featured by NBC news for their extensive series called 'Love in a barrel'.

"They travelled with me all over the country looking at the play therapy that I used for children who are children of migration," she explained.

She said that Jamaica is woefully short of play therapists, and as such, she has been forced to recruit these professionals from oversees when necessary. Currently, she travels across the island to schools to interact with children and has an ongoing project at the Shortwood Practising Infant, Primary and Junior High School in St Andrew.

"What I do is teach the children what to look for when somebody is trying to traffic them. So if somebody tries to take away your passport or if it is too good to be true, it usually is; those kinds of things, and then the children will then make up songs," she said.

With the help of UNICEF, she was able to introduce a programme where she provides schools with assessment, counselling and training materials, and she has developed books addressing different themes such as self-esteem, migration, anger management, bullying, violence prevention and conflict resolution.