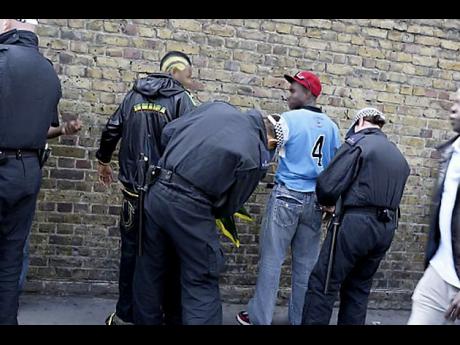 james sherwood / Demotix
In this August 2011 photo, two black youths being searched against a brick wall by police as they try to enter Notting Hill Carnival.

A couple of years ago, I began psychoanalytic training and it required that I undergo personal analysis (therapy).

This was a giant step for me, having spent my formative years in Trinidad where family therapy, marital counselling, and related services were scarce and even scoffed at, especially by men.

When problems emerged, we looked to our priests, pastors, pundits, imams, teachers, or family members - all helpful, but untrained in resolving complex issues. Sometimes, our wounds run too deep for mere words of advice.

This, I realised later in life, hence my foray into psychoanalysis. This discipline has taught me that many of our behaviours, insecurities, anxieties, fears and phobias emerge from unconscious impulses. In other words, we may rationalise our behaviours in meaningful terms, but we are none the wiser.

For the most part, we are the product of deep-rooted and buried thought patterns of which we are unaware.

During my personal analysis, which is still ongoing, I realised that despite the veneer of success and stability, deep within were conflicts of identity, race, religion, and a host of related complexes.

Bouts of depression, anger, anxiety, and fiercely competing racial and political views would seep through my well-constructed conscious self. I use the words "seep through" purposefully.

My stable family upbringing, and my parents' relentless support for my education, prevented any of my unconscious impulses from emerging unchecked, a situation that could have led to me becoming a social deviant with counter-cultural and self-destructive behaviours.

The more I underwent analysis was the more I realised that as a black man growing up in Trinidad and the United States, I couldn't divorce myself from race and identity. Academic or material success does not unknot the labyrinth that connects these forces.

We see these forces play out daily in the crippling death toll among black youth. (On the weekend of August 6, more than 70 youths were shot in Chicago). I dare say that purely sociological explanations (proliferation of guns, lack of opportunities and a skewed justice system) only masks the far deeper, intricate problem of self-hatred.

Case in point, the capricious use of the N-word among these youths has more to do with racial and identity conflicts than anything else.

And we realise how dizzyingly complex racial identity is when black professional footballers kneel, protesting racial injustice in the US, but stand respectfully when the British anthem is played. Ignorance and irony wrapped in one.

Expectedly, we cannot explore race and the black experience without looking at religion.

While religion advocates equality in the eyes of God, it has long complicated the identity question among blacks.

While we frown upon Afrocentric religions, we embrace the interlopers' faith that fashions angels and their saviour in their likeness, effectively devaluing our own blackness.

There is so much more to say on religion. Let's foray deeper.

As a retort to Christianity and Islam, black religious outfits have sprung up, sprouting views that reflect a people in the throes of an identity meltdown.

After interviewing members of the Selassie I organisation in Brooklyn (A defiant message from the church of Haile Selassie I, Jamaica Gleaner, September 8, 2013), I was told by one of the faithful, with dyed-in-the-wool certainty, that despite his Caribbean heritage, his forefathers were never slaves, but were Ethiopians.

And what should I make of self-proclaimed black Israelites wielding Bibles (as their evidence) at New York City street corners, claiming to be the real Jews and spewing hatred for Africans for having sold them into slavery?

Even if their ancestral and historical claims were to bear merit (a small percentage of Igbo people in South East Nigeria still practise orthodox Judaism), does it justify their confrontational and diversionary posturing?

Finally, denial or marginalisation of race in 'success' stories does not mean that it does not control our behaviours. Here's a curious statistic:

Seven-six per cent of successful black Brazilian men marry white women, a pattern seen in other countries, including the heart of Africa. See: https://www.news24.com/Columnists/GuestColumn/black-mens-scramble-for-ye....

While I tread judiciously on this matter, others have seen this tendency as a cry for validation amid insecurity, and yet another symptom of an identity crisis.

Clearly, the plethora of self-destructive, self-deprecating behaviours speak of a people sliced by the centuries-long sword of slavery.

Ten years ago, I asked Poet Laureate Eintou Springer to write the foreword for my book The Believers: The Hidden World of West Indian Spiritualism in New York. Her message was steeled in Jungian psychotherapy and clothed in the teachings of black psychiatrist Frantz Fanon.

Dr Springer has always held that the wounds of slavery have been so profound that they have become archetypal. She wrote: "Many of our people wander the earth after the Maafa (Black Holocaust), unburied ... We need to use our belief systems to put their souls to rest as a way of achieving peace and healing in our communities."

For sure, the haunting of our tragic past has taken a huge psychological toll. Our people must now confront the unconscious: our pains, our denial, our successes and our failures.

No amount of prayers will help us, no amount of political 'isms' and talk of reparations will heal the wounds. And no amount of genealogical and ethnic appropriations will mend our psychic fracture. Only black-centred psychotherapy will.

- Dr Glenville Ashby is an award-winning author whose psychoanalytic writings have appeared in Der Wiener Psychoanalytiker, Vienna, Austria. He is a member of the Society of Applied Psychoanalysis, Montpellier, France. Feedback: glenvilleashby@gmail.com or follow him on Twitter@glenvilleashby