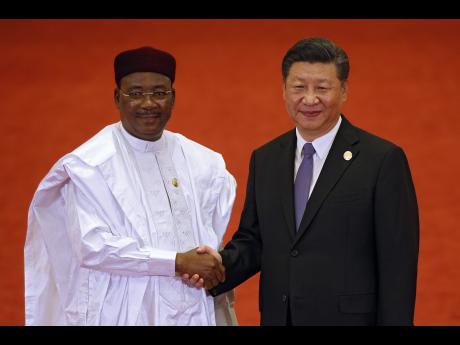 AP
Niger President Mahamadou Issoufou (left) shakes hands with Chinese President Xi Jinping as they pose for photographs during the Forum on China-Africa Cooperation held at the Great Hall of the People in Beijing last Monday. 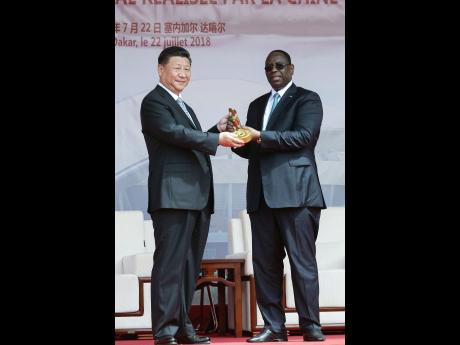 "Without commerce and industry a people perish economically. The negro is perishing because he has no economic system."

Today, as it did in 1571, Africa is faced with an existential crisis, the likes that threatens to culturally and economically castrate the continent once for all.

While the slave trade was overtly cruel and repugnant, this new colonial thrust into Africa is far more duplicitous and subtly disarming.

It was no less a personage than Marcus Garvey who trumpeted the call for the development of the continent through the infusion of black technocrats, educators, scientists and entrepreneurs; but never in his wildest dreams did he visualise this infusion coming from another people with a self-serving agenda that could ultimately prove ruinous for blacks around the world.

While some African leaders tout the injection of Chinese capital and expertise in the infrastructural overhaul of cities and towns, we are cautioned by academics, economists and educators against exuberance. The devil, they say, is in the detail.

What troubles many is China's political culture. A communist state with no regard for transparency, it is unperturbed by Africa's autocracies and perennial dance with corruption.

China embrace of Africa's kleptocrats could fatten their coffers and their grip on power while widening the gulf between the power structure and the African people.

Dr George B.N. Ayittey, president of the Free Africa Foundation based in Washington, DC, writes in The Rape of Africa by China, "China deals with just about any rogue and unsavoury regime in Africa that has some natural resource to exploit. It supplies jet

fighters, military vehicles and guns to Zimbabwe, Sudan, Ethiopia and other repressive governments. At the United Nations, China has used its veto power to block sanctions against tyrannical regimes in Sudan and Zimbabwe." (www.africanpost.com)

Against the backdrop of Chinese-financed bridges, railroads, hotels and more, cash-strapped African nations are saddled with debt and its people stand to gain little from these unilateral deals.

Brahma Chellaney, professor of strategic studies at the New Delhi-based Center for Policy Research, told CNBC: "Just as European imperial powers employed gunboat diplomacy, China is using sovereign debt to bend other states to its will. Because China chooses its projects according to their long-term strategic value, they may yield short-term returns that are insufficient for countries to repay their debts."

In the agricultural sectors, Chinese farmers have purchased small and large swathes of fertile land. In 2008, China had already earmarked billions of dollars in projects such as rice production as it faced increasing food security concerns.

But its reach into the very lifeblood of African existence is cause for greater concern. In the article, 'The Next Empire' (The Atlantic, May 2010), Howard W. French argues, "To construct a railroad was to command a region. To control a region in turn was to keep rivals out, or at least to restrict their trade participation through tariffs and other regulatory practices. Although China may claim to be a new kind of power, its plans, too, have always had a strategic component, including rivalry with the West, and lately a desire to circumvent the regional economic powerhouse, South Africa, and ultimately control the markets for key African minerals.

"In five short years, China has solved this problem, rebuilding Angola's Benguela railroad and laying the groundwork for a vast new rail-and-road network to be built in Congo, Zambia, and other peripheral countries. China will not turn these railways over to African governments, as it did with the Tazara. Rather, it will retain majority control of its rail investments, operating the railways until its money is recouped by ticket and cargo revenues and by other fees."

Clearly, what Africa faces is a neocolonial trap where its equity (resource) is swapped for its spiralling debt.

Some laud China's investments and non-interference in Africa's political affairs, in particular, its record of not toppling African leaders as the US did with our beloved Kwame Nkrumah and Patrice Lumumba, and as the French did with Burkina Faso's Thomas Sankara, Africa's greatest son.

And while some bumps in the road have surfaced (officials of the African Union (AU) openly accused Beijing of hacking its new headquarters in Addis Ababa, Ethiopia, an allegation it has denied), the AU continues to praise China's expansive reach, while the UN has encouraged African leaders to take advantage of the massive Chinese government infrastructure initiative. (UN official praises China massive project to Africa leaders, Associated Press, 3/7/17).

Sadly, Africa's Pollyannaism knows no bounds. On the eve of the recently concluded China-Africa two-day summit, President Keita of Mali was falling over himself in praise of China's friendship.

And in lockstep with Africa's leaders, Aubrey Hruby, author of The Next Africa, paints an idyllic picture of Sino-African cooperation in her feature, Dispelling the Dominant Myths of China in Africa. (The Atlantic Council blog, September 3, 2018).

But little does she really know or care about Africa's stolen past.

Regrettably, China's stranglehold on Africa reflects the cultural, spiritual and economic gulf that exists between the motherland and its diaspora. We can only blame our disunity, our powerlessness, our identity crisis and our misguided religiosity for this vexing reality.

Try as we may to shut the stable door, the horse has already bolted. Indeed, we have been cut off from ever fulfilling the dream of Marcus Garvey, indeed a prophet who tirelessly wrote and lectured about Africa's importance to its people. Yet again, the continent has been sold to the highest bidder. We can only collectively hang our heads in shame.

- Dr Glenville Ashby is the award-winning author of 'Anam Cara: Your Soul Friend and Bridge to Enlightenment and Creativity'. Email feedback to: glenvilleashby@gmail.com or follow him on Twitter: @glenvilleashby.