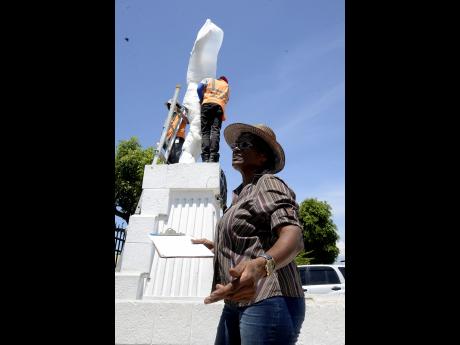 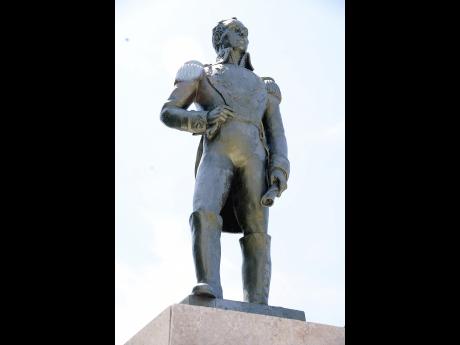 It will take close to $1 million to restore the statue of Simon Bolivar at Heroes Circle, Kingston, and the Jamaica National Heritage Trust (JNHT) will have to find millions more to restore other statues across the island.

Evelyn Thompson, conservator at the JNHT, told The Sunday Gleaner that the statue of the South American hero, a gift to Jamaica from the people of Venezuela, is in the worst condition of those it will have to restore.

Thompson said while the JNHT has the responsibility of maintaining the Simon Bolivar statue, for the past year, only the base has been spruced up based on the cost.

According to Thompson, well-intentioned individuals, and in some instances municipal bodies, try to give a facelift to the bronze statues by painting them, but this only makes it more difficult and expensive for the JNHT to restore to its original condition.

"People ... will, on their own volition, or based on contact with some other entity, may decide that they need to do something to increase the aesthetics of a given monument, and in the process they compromise the authenticity of the monument," said Thompson.

"Most of these monuments are associated with one municipality or another, and based on the nature of the municipality, there is some level of independence. If they are not aware of the JNHT and our role to protect our national monuments, they might compromise the monument," added Thompson.

She argued that every new chairman of a municipal council should be educated about caring for the country's monuments.

Thompson said the JNHT had to step in after the Kingston and St Andrew Municipal Corporation contracted an outside conservation team to do work on a national monument in the capital city.

The JNHT official was speaking with The Sunday Gleaner last week as her team painstakingly prepared to start the restoration of a defaced statue of National Hero Norman Washington Manley outside the St William Grant Park in downtown Kingston.

According to Thompson, the conservation of the Norman Manley statue will cost about $200,000 after it was vandalised with paint by individuals.

Thompson listed the Simon Bolivar statue, that of Norman Manley in downtown Kingston; Emancipation Song in Emancipation Park, St Andrew; and the Bob Marley statue outside the National Stadium, as some which are frequently damaged by individuals.

"It's not just a matter of changing the aesthetic appearance. From a conservation perspective we are looking at something that is sufficiently significant to be classified as our national heritage, and consequently we want it to be there for posterity," said Thompson.

She noted that each statue is made differently and requires different methods of conservation.

Kimberly McLaughlin, director of communication at the JNHT, said more will have to be done to sensitise individuals, and the municipal councils, on how to appropriately care for the statues.

"Once you add paint to a bronze sculpture you are going to complicate the structural integrity of that statue, and that will result in the JNHT having to go through more expensive and more extensive work to reverse the damage done.

"And if the statue is not identified, the longer it will stay there and the more damage will be done," added McLaughlin.