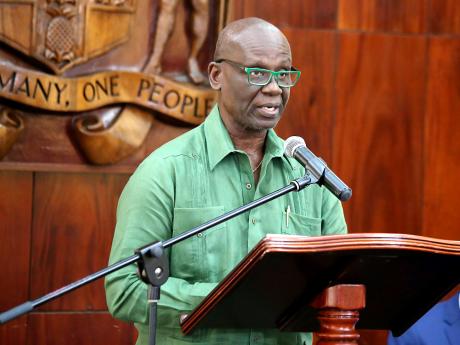 The country’s emergency response agencies are on alert as the country braces for the possible effects of Tropical Storm Isaac, which is expected to pass south of Jamaica over the weekend.

Tropical storm Isaac, which was downgraded to a tropical depression Friday, is expected to dump heavy rainfall across the island.

Minister of Local Government Desmond McKenzie, speaking at a special sitting of the Trelawny Municipal Corporation yesterday, said that although the island will not suffer a direct impact from the weather system “precautionary measures must be taken”.

“We are now beginning to see rainfall taking place. It is very critical that we put on alert all the major players right across the country for any expectations as it relates to flooding,” he said.

He informed that shelters will be activated, if necessary, and urged councillors to keep a keen watch on flood-prone areas within their divisions.

In the meantime, Mckenzie announced that $115 million will be made available to municipal corporations to carry out emergency drain cleaning over the next few days.

The local government minister also encouraged local authorities to make the necessary provisions for homeless persons during the hurricane season.

“Special attention must be paid during this period to persons living on the streets across our respective municipalities.

“I would urge you, in whatever you are doing, to ensure that if and when anything happens, provisions are made to take these persons off the streets and to get them into shelters or into the infirmaries,” he said.