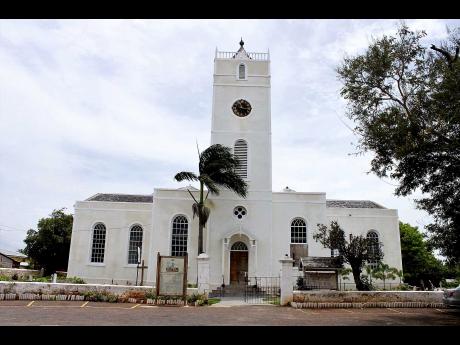 Christopher Serju
The restored façade of the front section of the church reflecting the hard work and time spent on it new lease on life. 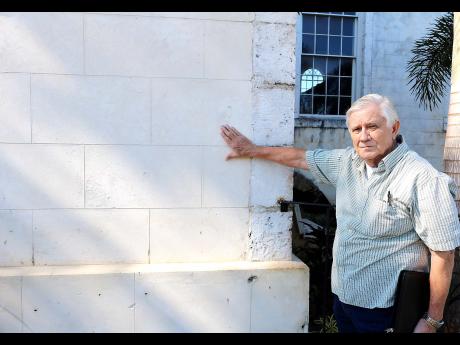 Built in 1796 and located in the town's historic district, the Falmouth Parish Church, also known as the St Peter's Anglican Church, is the oldest public building in the Trelawny capital and the most visited tourist site in the parish.

Though still majestic in its architectural splendour, by 2008, the church had begun to show signs of deterioration after more than two centuries of lack of maintenance. The deterioration had reached a stage where it demanded urgent attention to stem the effects of the ravages of time and the elements.

Massive repair and restoration were needed for the roof, pews and vestry entrance, which had all fallen victims to termite infestation. The front gate had deteriorated to the point where it was no longer functional and was unsightly.

The church walls needed refurbishing as they had been damaged by water leaking from the roof. Parishioners, especially the elderly, struggled to cross the church grounds through mud and bush, and the construction of a walking path was desperately needed.

Parrent and Associates was contracted to undertake the restoration, but when they started, they found that the damage was much worse than anticipated.

A stained-glass window depicting the Madonna and Child that had been put in place when the church was originally built was now destroyed after efforts to protect it from Hurricane Gilbert, which struck Jamaica in September 1988.

The stained-glass window had been boarded up, and the boards were never removed. As a result, the lead had deteriorated because of all the moisture sealed in for over 20 years.

Dr James Parrent, managing director of Parrent and Associates, pointed out that the external facade that had been constructed from limestone had been gouged in sections by acid rain.

"We have a lot of acid rain in Jamaica, and acid rain, of course, reacts with limestone. It actually dissolves limestone. What had happened was that since the church was built, there hadn't been a facade treatment, so the stones over time all fell off. They had been dissolved by acid rain and just deteriorated - it's been a long time, and so, this particular building was built by what I call 'young limestone'," said Parrent, who has worked extensively on similar projects across the world.

The entire building was treated with a limestone solution of quick lime and water mixed to the consistency of paste, rubbed on to and into the pitted walls until restored to a smooth finish.

Today, the Falmouth Parish Church stands tall and is much more solid due, in large measure, to the intervention through which its old-world charm was enhanced and the centuries-old building given a new lease on life.

Its restoration represents a multimillion-dollar collaborative effort with investments by the Jamaica National Heritage Trust, the Tourist Enhancement Fund, the European Union Sugar Transformation Unit, private citizens, and parishioners committed to ensuring that it continues to stand the test of time.