Holness calls for a more peaceful world at UN summit 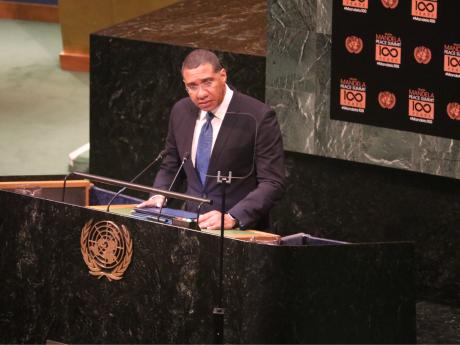 Prime Minister Andrew Holness has called for world leaders to “commit to the consolidation of peaceful coalitions”.

“What better occasion than this Summit to do just that,” Holness told the world leaders as he delivered Jamaica’s Statement to a United Nations (UN) Nelson Mandela Peace Summit held on September 24 at the UN Headquarters in New York to mark the centenary of Mandela’s birth.

“Let that be our legacy in his honour,” the Prime Minister emphasised.

Holness underscored the forum’s importance and timeliness “at a time of heightened global concern about hostility and conflict within some of our societies”.

He stressed the relevance of the Summit’s focus – Global Peace – especially “with some regimes focused on the use of might, rather than the protection of right”.

“The centenary of Nelson Mandela’s birth provides space for us, as world leaders, to affirm the need for healthy and meaningful dialogue to engender peace, reconciliation and communal accord, principles that Mandela would very much wish us to promote on this occasion,” the Prime Minister said.

Holness said these goals are not easily achieved without significant sacrifice from leaders, pointing out that “no one understood this more than Nelson Mandela”.

He noted that Nelson Mandela understood, throughout his long walk to freedom, that full freedom could only be achieved if he left bitterness behind.

“We were the first country in the Western Hemisphere and second in the world, along with India, to ban trade and travel with the racist regime,” he added.

The Prime Minister is in New York leading Jamaica’s delegation to the 73rd session of the UN General Assembly, where he will deliver Jamaica’s Policy Statement on Thursday (September 27).