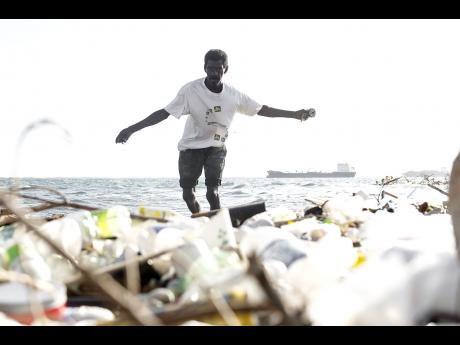 Gladstone Taylor
A fisherman surrounded by various types of plastic waste near the Michael Manley Boulevard in Kingston on Wednesday, September 19.

A week after announcing a ban on single-use plastic bags and other plastic items, the government has established a plastic policy hotline to receive comments and queries about the ban, which takes effect on Tuesday, January 1, 2019. The public is invited to call the hotline number 876-285-8531 from 10 a.m. to 3 p.m. on weekdays.

"The hotline comes following the implementation of an email address, policyonplasticban@nepa.gov.jm that was established on Friday, September 22. The public may use these channels to submit comments, suggestions and queries. Manufacturers and other impacted stakeholders are also encouraged to use the dedicated channels to present their queries regarding the exemption application process," the National Environment and Planning Agency advised in a release on Monday.

The announcement of the hotline coincides with a statement in The Gleaner on Monday from the Caribbean Policy Research Institute (CAPRI) on challenges that could undermine the effectiveness of the ban.

Following is an excerpt: "CAPRI welcomes the Government's initiative, but we are concerned that there are inherent challenges in a ban that are likely to undermine its success. These challenges include resistance from manufacturers, the emergence of a black market, and difficulty in enforcing the ban, all of which have presented themselves in other countries, including India, China and Somalia, that have attempted to ban plastic bags in an effort to combat plastic pollution."

A day after announcing the ban, just before leaving for Canada to attend the G7 Environment Ministers meeting, minister without portfolio in the Ministry of Economic Growth and Job Creation, Daryl Vaz, responded to criticisms about the ban, which also applies to styrofoam products.

He rejected as "false and without basis" a declaration from chairman of the Wisynco Group, William Mahfood, that the decision "is a knee-jerk reaction that will not work". Vaz went on to defend the decision on the grounds that it had been preceded by discussions with a number of private-sector groups, including CAPRI.