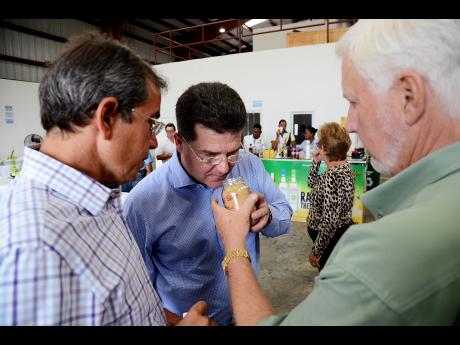 The announcement, which was made at the Worthy Park Sugar Estate in Ewarton, St Clarendon on Monday, is a result of an equity investment by Wisynco's parent company, Wisynco Group (Caribbean) Limited, which has acquired a 30 per cent shareholding in the sugar company, with which it has inked a five-year exclusive distribution deal.

The partnership between Jamaica's most efficient sugar producer and one of the island's largest agro distributors is being hailed as a win-win situation for both entities, according to Gordon Clarke, co-managing director of Worth Park Estate Limited.

"With Wisynco and Worthy Park working together, there will be new synergies and will result in both companies being stronger than before - individually and together," he told journalists at a press briefing on Monday. "With Wisynco's proven track record as both manufacturer and distributor, we had no hesitation to offer them part ownership in our company and the opportunity to distribute our own sugar."

Under the agreement, Wisynco will handle distribution, sales, trade marketing, and advise on product innovation, while Worthy Park will handle manufacturing and consumer marketing.

"We expect an annual revenue increase of approximately J$2 billion once we take over the distribution of sugar and spirits portfolios," Chairman of the Wisynco Group Limited William Mahfood pointed out. Worthy Park now distributes 60 per cent of its sugar and 80 per cent of its rum on the local market, and accounts for 30 per cent of local sugar production.

Mahfood went on to explain the decision to invest in the sugar estate at a time when the local industry is reeling under the weight of high operating costs, loss of preferential treatment, lack of the requisite retooling to bring on stream diversification into value-added products, as well as other changes needed to make it globally competitive.