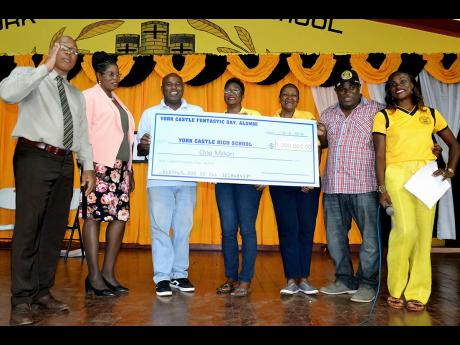 Carl Gilchrist
President of the York Castle Alumni Jennifer 'Jenny Jenny' Small (right) and other past students handing over a cheque for $1 million to the school on Wednesday, September 19. From left are Raymon Treasure, principal; Antoinette Edwards, vice principal; and alumni Maurice Brown, Joy Speare and Michael Riley. 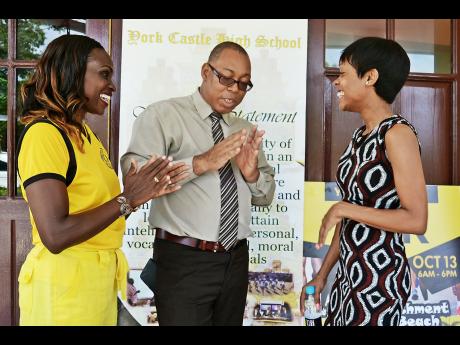 The York Castle Alumni, led by new president Jennifer 'Jenny Jenny' Small, on Wednesday, September 19 handed over a cheque for one million dollars to the school, while launching the inaugural 5K Walk/Run on October 13 to raise additional funds for the Brown's Town-based institution.

The funds were raised from the Funtastic Day held at the school earlier this year and marked the second year that the event has raised that amount.

School principal Raymon Treasure said the initial amount was used to improve the sporting facilities, while last week's donation would go towards improving the computer facilities.

"The CXC is now requiring that the students do technical drawing (Autocad) on their computers, so we will be using this donation to purchase about 25 computers to improve the delivery of the Autocad programme here at York Castle," Treasure revealed.

He said the New York alumni chapter has also provided $1.5 million to implement a solar project for the school.

"We continue to be grateful for what the past students are doing for York Castle High School. This is tremendous as far as the school improvement projects are concerned," he added.

Small said a well-supported Funtastic Day ensured that the million-dollar mark was reached and pledged to increase that figure for next year.

"When you have a school with such high quality, the needs are there," she pointed out. "It is my passion as president of York Castle Alumni to continue to make sure that standards are held, to make sure they (students) are not in need. I was a student in need. All of this that we've put together is to ensure that we don't have students at York Castle High in need."

Meanwhile, the 5K Walk/Run is set for Heroes Weekend and starts at 6 a.m. at Salem Beach, lead to Flavours Beach and back to end at Salem Beach, after which an all-day 'Bashment' will be held until 6 p.m.

LASCO, through the iCool Water brand, has come on board as title sponsors for the event, and according to brand manager - beverage, Lyshon Davis, the company is sponsoring the race to the amount of $800,000, with $500,000 in cash prizes and $300,000 in products.

"We have all the products required to sponsor a 5K so when Jenny Jenny approached me I said of course. We have iCool water, iCool flavoured water as well as iDrade sports drink," Davis pointed out.

And according to Small: "We've never had a 5K and we're very, very happy to have our LASCO iCool Water and, of course, York Castle Alumni 5K, the first of its kind, and we're excited about that because we have so many needs (at York Castle)."

Councillor for the Brown's Town division, Kim Brown-Lawrence, officially launched the 5K during a ceremony at the York Castle auditorium.