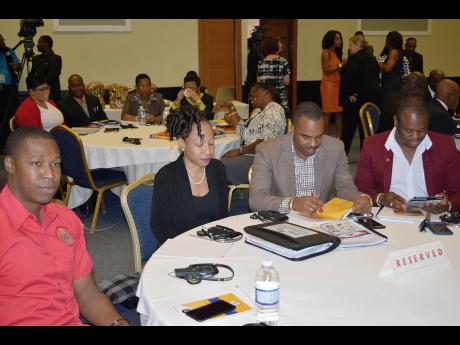 Contributed
Members of the Jamaica Constabulary Force at the recent Child Justice Guidelines training seminar for the police.

Two months ago, Sergeant Janet Williams-Richards was sitting across from a teenage girl in distress. The teenager was shaking and in shock.

Williams-Richards wrapped her arms around the girl, held her close and said, "I don't know what you have been through, but whatever it is, you will be OK." After being comforted for some time, the girl reported that she had just been raped.

Every year, hundreds of children across Jamaica who are victims of crime, in need of care and protection, witnesses to a crime, or who have committed a criminal offence have to interact with the justice system.

The police are often their first point of contact. While there are cops like Williams-Richards who treat these children with dignity, many other children face interactions with police and other professionals throughout the justice system who are terrifying and far from child-friendly.

In 2013, in response to this reality, the Office of the Children's Advocate (OCA), with support from UNICEF, introduced the Child Justice Guidelines - which outline how professionals across the justice system should handle any child with whom they interact.

Since then, the OCA has trained more than 80 per cent of the judiciary in implementing the Child Justice Guidelines, as well as prosecutors, including clerks of court in the parish courts across the island.

Focusing on the Security Sector

Now, the OCA is focusing on the security sector, particularly the police. The first residential Child Justice Guidelines training seminar for the police was held from September 21-23.

More than 100 members of the Jamaica Constabulary Force (JCF) from different parishes, and of varying ranks, participated. Previously, smaller non-residential training seminars have been held for the police.

Speaking at the seminar, Children's Advocate Diahann Gordon Harrison implored the cops to follow the guidelines in their operations. "You are our first responders, our eyes and ears. You are the ones who will frame the child's long-lasting impression," said Gordon Harrison.

She explained that the Child Justice Guidelines were necessitated by numerous situations in which children were treated without care and sensitivity.

The Children's Advocate noted that this includes children who are detained for long periods before they are seen in court, and victims of rape who are made to sit on the same bench as their accuser while waiting at court for their matter to be heard.

"This partnership between OCA and the JCF builds on the efforts made over many years to strengthen the capacity of police officers to uphold human rights and act in the best interest of children," said UNICEF Deputy Representative Lone Hvass.

She noted that the Child Justice Guidelines are consistent with the Convention on the Rights of the Child, to which Jamaica is a signatory.

The guidelines were strongly endorsed at the seminar by the Minister of National Security Dr Horace Chang,

"Chasing bad guys is not your only role," said Chang. "We need police officers to capably and decisively deal with gangsters. We also need to prevent the recruitment into gangs of children. This training assists with that kind of prevention."

Commissioner of Police, Major General Antony Anderson, also touted the guidelines as a form of prevention.

"We have to stop the inflow (into gangs), and that inflow can change at the first point of contact. It is in our enlightened self-interest not to create another problem that we are going to have to solve later."

Members of the JCF acknowledge that the realities on the ground can be difficult, especially when children commit a serious offence.

"Police officers are often required to address in a day issues that took years to deteriorate," said Constable De'Ronn Pinnock.

Improvements At All Levels

He emphasised that improvements must happen at all levels - legislation, social services, law enforcement, and families - for children to be better protected.

"This training is a good refresher, and it has reminded me of how fragile children are. But we can't do it alone. If the attitudes of parents do not change - the ones who facilitate criminality - our job as police officers will forever be difficult."

Williams-Richards is often called to situations with children who are considered "uncontrollable", and she had some advice for her colleagues.

"Before taking action as it relates to a criminal offence, or any other offence for that matter, stop and think 'This is a child before me'. Analyse the situation that is brought before you. Talk to the child, if the child will talk to you.

"If you really are interested in finding out why this child is acting this way, then you will see and hear some things that will help you to make a decision. And be genuine. Once a child realises you are genuine, that alone is the start for helping that child."