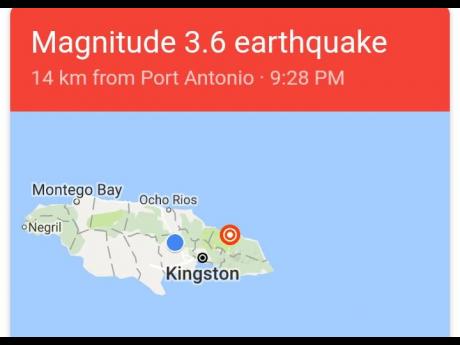 Sections of the island were rattled by a minor tremor around 9.28 p.m. on Sunday.

The exact measurement and other details were not immediately available from the Earthquake Unit.

However, the United States Geological Survey reported that it was 3.6 magnitude tremor with its epicentre west north-west of Hope Bay, Portland.

In September, two minor earthquakes were recorded in Jamaica.

Almost a day ago, Caribbean neighbour, Haiti was rocked by a 5.9 magnitude tremor which has left 11 dead and more than 35 others injured.

According to the Earthquake Unit at the University of the West Indies, about 200 earthquakes are located in and around Jamaica per year most of which are minor, having magnitudes less than 4.0. Here are five facts about tremors in Jamaica:

2. The largest and most damaging natural disaster in Jamaica was the famous Port Royal earthquake of June 7, 1692, It was felt island-wide and a part of Port Royal sank into the sea.  It was reported that at least 2,000 persons died as a result of an outbreak of yellow fever, which developed after the quake.

4.  More than 1,000 people died mostly in the fires following the main shock and aftershocks of the 1907 earthquake. After-shocks continued for the rest of the year.

5. The largest event after 1907 was on March 1, 1957.  Buildings and infrastructure in Western Jamaica suffered the most damage and a bit of the Port Royal coast sank into the sea.