More Corporate Area roads to be dug up, says NWC 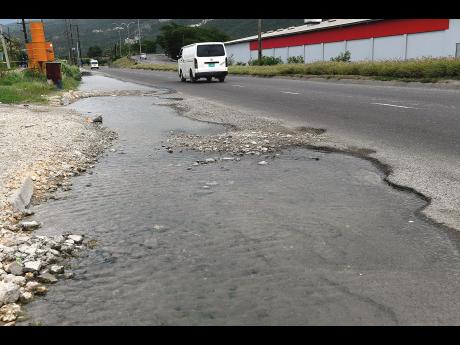 Norman Grindley
The left lane of a section of Spanish Town Road in the vicinity of Riverton City in St Andrew earlier this year, which was being eroded by water from a broken National Water Commission pipe. The Commission says residents of the Corporate Area should expect roads to be dug up to address the leaks.

"The digging up is primarily to address the leaks which are both visible and non- visible [which] are being found under the active leak programme. We also plan to install valves and other control devices and to establish pressure zones. That is the primary reason for the increase in frequency of these roads being cut," the NWC's corporate public relations manager, Charles Buchanan, told The Gleaner recently.

"We use specialised devices to search for leaks that do not come to the surface. When our specialised team does their check at nights, they will realise there is a leak underground that wasn't coming to surface. Persons will see us digging an area they did not see leaking, but it actually is leaking underground and wasn't coming to the surface either because of the type of soil or because of some other condition. All of these things have seen us in the public roadways more than we were previously, which is a part of ensuring we have the network capabilities in place."

Buchanan pointed out that the issue of old and broken infrastructure has the commission's attention and is being attended to using the most cost-effective method possible.

"Most of the pipes that the NWC has underground are older than the engineering life the pipes were expected to give. Pipes that were built to last 40 years are still being utilised even when they are 50 and 70 years old.

Pipes [have] frequent incidents of breakage. This is why the NWC is taking steps to change the network operations in Kingston and St Andrew," Buchanan said.

He continued: "We are not in a position to replace all pipes in need of being replaced. The best thing to do is to put yourself in the best position to manage and control the pressures being felt in the network, and that is what the Non-Revenue Water-Reduction Project is doing now.

He said the NWC is now in the throes of implementing the programme, and more roads will be affected.

"We have stated over and over that as a result of the activities, we are going to be digging up places than we were doing before. Under the programme that will continue until 2020, the NWC is required to dig up roadways and replacing infrastructure where necessary," Buchanan said.