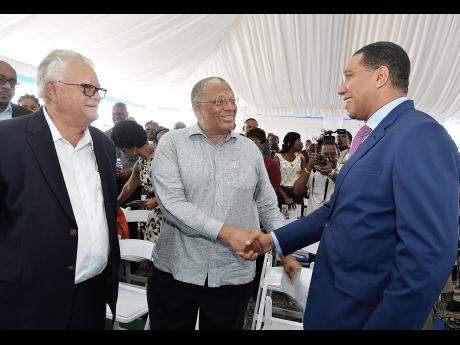 Prime Minister Andrew Holness says that a report that was commissioned last year to look into the future of the National Housing Trust (NHT) has been completed and will be made public shortly.

A debate on the report's content will also take place in Parliament before the end of the year.

"About a year ago, we commissioned a review of the NHT. The commissioned report is now completed, and we will make it public very shortly. Before the year is out, we will have a debate in Parliament on the report itself," Holness said at the groundbreaking ceremony for a new $860-million housing project in Frog City, Maxfield Park, last week.

He said that the report contains proposals on how the NHT can be reformed in order to support national agenda items, such as the economic programme, and how to expand its true mandate of increasing home ownership in Jamaica.

"I am hoping to have this debate in Parliament on the way forward for the NHT before the year is out. It is already a very packed parliamentary agenda, but I believe we should go into next year with a decided vision, both Government and Opposition, as to what will be the future of the NHT," Holness said.

The role of the NHT has been a contentious one in recent years, as both the People's National Party and Jamaica Labour Party administrations have drawn down funds from the Trust to assist economic programmes.

"I am glad I have the attention of the leader of the Opposition, because the NHT is such a critical organisation that there has to be consensus on the future of that organisation.

He noted that every year that the Government takes money from the NHT, it closes off the opportunity to expand the actual mandate of the Trust, which is to build more houses.

"So It is important that I look at the NHT, not so much as a social organisation to build housing, but more so as a financial institution that is well run and well managed, so that it can support the social programmes to build housing solutions such as this one," Holness said.