Tamara becomes family's second scholar ... She made her parents proud 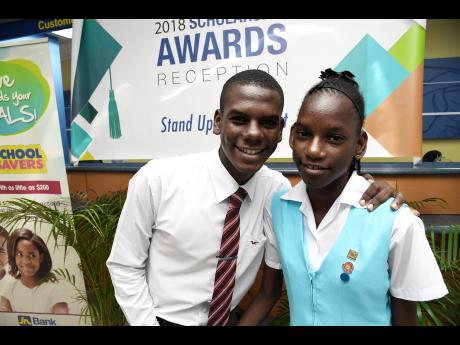 With both her parents being grade-six teachers who prepare students for the Grade Six Achievement Test (GSAT), the expectations for Tamara Burton, former student at Harbour View Primary School, were high.

Interestingly, her mother, Norda Burton, was her grade-six teacher.

"She treated me no differently from the other students," Tamara declared. "She was fair, and I received punishment, just like everyone else."

Through tireless effort, Tamara was determined to excel in the GSAT and earn a scholarship to follow in the footsteps of her brother, Adrian, who received the same scholarship four years ago and is now attending Ardenne High School in St Andrew.

Her hard work paid off handsomely when she achieved a 97.4 per cent average and gained a five-year scholarship from JN Bank for being a JN School Saver participant who had the most outstanding performance in the GSAT in the county of Surrey.

For her family, the scholarship award was like dÈj‡ vu, because it was the Jamaica National Building Society, now JN Bank, which awarded her brother his five-year scholarship for being the JN School Saver participant, and also the top performer in the GSAT for the county of Surrey in 2014.

"The fact that it was the Ministry of Education which identified them for the scholarship really highlights the sheer coincidence of the award," said Shanna Kaye Wright, youth marketing officer at JN Bank who oversees the JN Schools Savers' Programme.

"Annually for the past 17 years, we have been awarding a scholarship to the JN School Saver with the highest average in the GSAT in each county," Wright explained.

For 12-year-old Tamara, the coincidence did not stop with the scholarship award. Similar to her brother, she consistently achieved averages in the 90s; received a gold award for academic performance; and emerged as the top GSAT student at Harbour View Primary School.

"I'm really proud of her," her mother related." She has always been a hard worker, driven, focused, and delivers outstanding performances."

Tamara was among 37 top performers in this year's GSAT who were officially recognised as 'JN Scholars' at a scholarship awards reception, organised by the JN Foundation, which was held at the JN Bank Half-Way-Tree branch on September 9.

She credits her father, 2013 Maths Teacher of the Year Richard Burton, a grade-six teacher at the Windward Road Primary School in Kingston, for assisting in her preparation, which earned her a place at Wolmer's Girls School in the city, her first choice.

"He was the one who checked my homework, while it was my mother who gave me the assignments," she pointed out.

"I wanted to go to Wolmer's Girls because my aunt and two older cousins went to that school. Also, I am interested in track and field; therefore, I am looking forward to representing the school at Champs; and, hopefully, gain more scholarships," she anticipates.

She is not yet sure what she wants to be when she grows up, however, she is giving some consideration to becoming a medical doctor.

Tamara, who is proud of her academic accomplishments, also celebrated her reward which came as a result of her disciplined savings habit that earned her the scholarship in the first place.

"I saved daily from my lunch money. My saving goal is to purchase a smartphone," she disclosed, while urging other youngsters to develop a disciplined saving habit.

"It is important for students to save because it can help them out of financial trouble later in life," she advised.