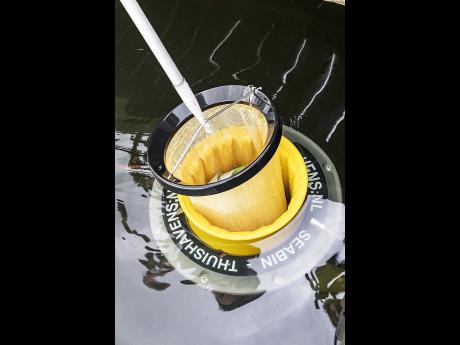 MAARTEN FEENSTRA
The seabin that is to be installed at the Montego Bay Marine Park.

JAMAICA ENERGY Partners (JEP) will this month continue in its efforts to help protect Jamaica's natural resources by embarking on a project that focuses primarily on the preservation of marine life.

On Friday, October 19, JEP, in association with the energy company and one of their international partners Wartsila, will launch a seabin at the Montego Bay Marine Park.

The US$3,500 seabin, which is docked, is a submersible garbage bin that collects floating debris, surface oil and pollutants in the water.

"Water is sucked in from the surface by an electric pump and passes through the catch bag filter inside the seabin. The water is then pumped back into the ocean leaving litter and debris trapped in the catch bag," explained the JEP in a release to the media.

The seabin project is an international initiative to help keep our oceans cleaner and can collect up to a half tonne of debris per year, including microplastics up to 2 mm small.

First to enter the Americas, the seabin was designed to protect marine life which is affected by pounds of garbage that enter the oceans each year.

"JEP and West Kingston Power Partners participate in several initiatives that reduce our carbon footprint and engender a culture of environmental awareness. We hope that through this initiative we will decrease marine pollution and encourage Jamaicans to play their part as we champion cleaner oceans," the JEP said.