Slackness! - Lap-up buses cause Portland mother to transfer child to a school closer to home 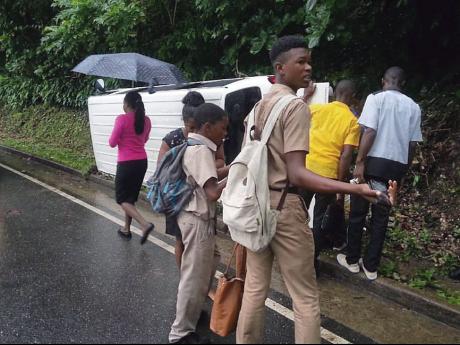 Contributed
Students join adults in looking at the accident scene after they narrowly escaped serious injuries during a bus crash in Portland. 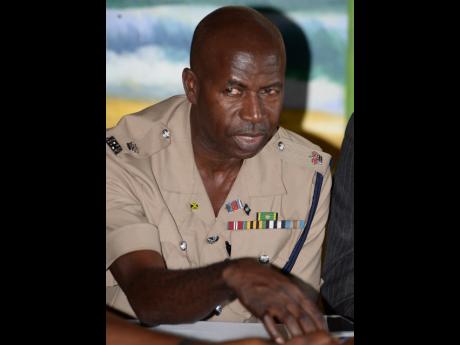 Nicolya Brown* was excited about her daughter being placed in the high school of her dreams after her strong performance in the Grade Six Achievement Test.

But after just one week, Brown had to seek a transfer for the child to a school closer to home, as getting to school on public transportation in her east Portland community proved hellish for the 12-year-old.

According to Brown, the conductor on one of the buses available to take her child on the 40-minute-long journey from Port Antonio to school insisted that she should sit in the lap of a male or get off.

Brown, a mother of six, said having accompanied her daughter to the bus stop, she was surprised to see schoolgirls sitting in the laps of male students. When she questioned this, she was told to comply or get off.

"The conductor told me that if she don't sit in a lap she can't go to school. I said to one of them one morning, 'I don't want her to sit in any lap', and him say all me do is buy me own vehicle.

"She really wanted to go that school so I said 'OK then, let her sit in a girl's lap', but him say it cannot work like that, she have to sit in a boy lap because boy can't sit in boy lap," said Brown.

WAS NOT TAKEN LIGHTLY

The distraught mother said this was the case on every trip to and from school no matter what bus she took, so she decided to transfer her child from her dream school after just one week to one just six minutes from home.

Brown rejected criticisms that she acted too quickly, and insisted that she did not make this decision lightly.

"I bought five uniforms for her at $2,500 a one. I paid $7,000 at the school, to buy things like jersey and tie, and all a them gone down the drain. Right now she is wearing one uniform to the new school because I cannot afford a next one, but I'm not going to send her to school in a boy lap so I move her," declared Brown, who is unemployed.

Her daughter is not entirely happy at the new school, but she is making the best of it.

"She's a bright girl and people always say her new school a dunce school and this and that, so she's not happy with that. But because of the lap business she say, 'I'm going to just work with it'.

"I didn't want to put her there," said Brown, who is urging the authorities to look into the transportation for students in Portland.

"Now I am saying when they pack these buses, the children them have to sit in a lap, and if the bus is made to carry 15 people it end up with 30 people, and I'm saying what if the bus crash?

"I think if the bus people them cannot carry them, Government should put two or three buses on the road that can carry them to school. It wasn't right for my child and it's not right for any other child," said Brown.

"Let me congratulate both the parent and the child for refusing to be subjected to this standard of service offered by elements within the public transportation sector," said Reid.

He told The Sunday Gleaner that the established protocol would have been for the school to report the matter to the ministry's regional office so that a solution could have been worked out with the Safety and Security in Schools Unit.

According to Reid, he is aware of the many challenges that students in rural Jamaica face every day with regard to transportation, and has partnered with local bus operators to provide a service.

He said 360 students from five high schools and one primary school in Portland are targeted to benefit from this initiative.

"For students who are not on PATH but are having major problems with transportation, especially as it relates to its cost, the ministry will continue to encourage the guidance counsellors in schools to find creative ways to assist these students," said Reid.

Head of the Portland police, Superintendent Duane Wellington, said they are aware of the conduct of the bus operators in the parish and are working to address it.

"They have given tickets and empty out the excess passengers from time to time, but as you know we don't have the ideal numbers to manage the distance, so some will seep through the crack.

"It is definitely a concern for the police and we are going to keep on pressing to see how best we can change the whole mentality of the drivers and the conductors," said Wellington.