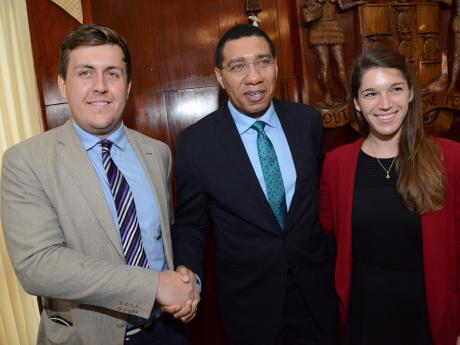 Prime Minister, Andrew Holness, (centre) shares a moment with James Ellsmoor, Director of Solar Head of State, and Alexis Tubb, Project Manager of the Clinton Foundation, at the handing over ceremony of solar panels installed at the Office of the Prime Minister in St Andrew on Tuesday, October 16, 2018 - Rudolph Brown photo.

Prime Minister Andrew Holness says he has directed that Jamaica pursues a target of achieving 50 per cent of its energy generation from renewables by 2030.

Under current policy, the country has a target of 30 per cent.

Speaking this morning at a handing over ceremony to mark the installation of solar panels at the Office of the Prime Minister in St Andrew, Holness expressed confidence that the target can be achieved.

He said the move is aimed at mitigating against what he described as the ‘existential threat’ of climate change to the environment.

He said though the Caribbean emits less than one per cent of greenhouse gases, persons should not get caught up in the blame game but instead should do what they can to protect the environment.

“The people who will be on the front line from any catastrophe of our environment will be Small Island Developing States like Jamaica. The ignorance of the threat is not on those who, for political or academic reasons, decide to be blind to it. It is for those who will be impacted by it, but are too poor to have the information and understand it,” he continued.