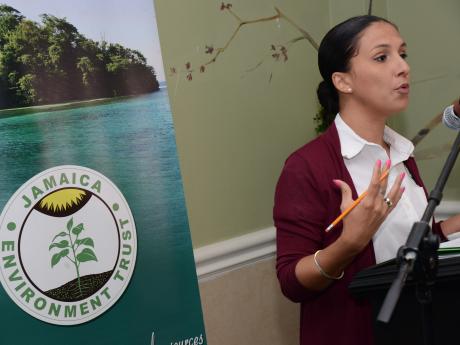 The Jamaica Environment Trust (JET) has called for Prime Minister Andrew Holness to address the concerns of residents of Industry Cove, Hanover regarding the construction of a housing scheme in their coastline community by the National Housing Trust (NHT).

According to JET, the residents fear that the effluent from the community's sewage plant will be discharged into the sea.

Holness broke ground for the 63 unit housing solution In August, which is the first NHT project in the parish for 25 years.

The residents claim that the outlet for human waste into the sea is close to a public beach, which served the community for more than a century.

“The residents contend that this site is unsuitable for housing and a sewage plant due to the natural resources that are present – the wetlands, seagrass beds, beach and nearshore coral reef,” said Suzanne Stanley, CEO at JET.

“How can a sewage plant for a development be approved (and be underway), when the actual development has not started?

“JET calls for the Prime Minister and the de facto environmental minister, the Honourable Daryl Vaz, to stop this harmful development and restore the damaged wetlands to their former state of health,” added Stanley.

She argued that "it is long past time for sanctions to be applied against state agencies which breach environmental laws.”

The residents have filed a claim in the Supreme Court against the NHT and other state entities including the Hanover Municipal Council and the Negril Green Island Planning Authority for "illegally and irrationally approving a sewage treatment plant."

JET charged that although the court granted an injunction until October 29, 2018, when the matter is scheduled to be heard, but construction has reportedly continued at the site.