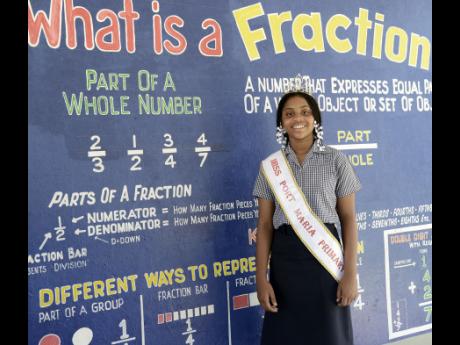 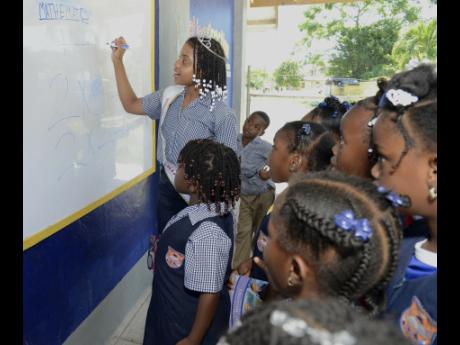 Mathematics has always been a difficult subject for 10-year-old Shatara Young, but by creating a maths gazebo at her school, she has found a solution that is helping her, and other students, to better grasp the subject.

"I too have maths problems," admitted the grade-five student when The Sunday Gleaner visited her at the Port Maria Primary School in St Mary last week.

"Some of the children have maths problem too, so I thought I would help them. So everywhere they go, they would see maths, eat with maths, play with maths, and in class, they would learn how to do the maths," said Shatara.

The gazebo easily draws the attention of visitors with its colourful seats and tables. The tables have images of popular board games like ludu, snakes and ladders, and draughts. Mathematics concepts adorn the walls, with white and black boards included.

"If they (children) have division, or if they have multiplication questions, they can go on the board and solve the problems that the teachers have given to them," said Shatara.

She added: "On the tables, we have games that are related to maths."

Shatara is a ward of the state who is fostered by Avril Hines, a former teacher at the school. Avril's sister, Dr Petra Hines, was the first to meet Shatara as her mother was a patient at the hospital where she worked.

Dr Hines often took Shatara home to spend time with her family and continued to maintain contact when her mother was unable to care for her. The State then placed Shatara in the care of her godmother.

"I was helping the godmother with her, but the godmother had too many responsibilities and other children, so she wasn't getting what she was supposed to get," said Dr Hines.

"Everybody in the family just got vexed one day and said OK, she needs to stay (with us)."

Because of the doctor's busy schedule, Avril was the one who applied to foster Shatara. The bubbly little girl is now being raised by the family, which includes Avril, her mother, two nieces and a nephew who was taken into the family when he lost both his parents. He is now studying law at the University of the West Indies.

"Shatara belongs to all of us," declared the matriarch of the family, Linda Sutherland-Hines, who is a former matron at the Port Maria Hospital.

The mathematics gazebo was a labour of love and was built after the family managed to secure funding from well-wishers.

"We wrote letters, the usual begging letters. We begged for contributions and we got contributions from about three persons amounting to about $50,000. We put personal contribution and we credited from a hardware store.

"Even now we don't know how much we owe them, because their contribution was to allow us to credit," said Sutherland-Hines, who added that a former student at the school painted the mathematics concept on the wall for a discounted fee.

The project was completed in one month and represented the fulfilment of a pledge made by Shatara after being declared Miss Port Maria Primary earlier this year. She went up against several other students and won the coveted title.

"She won and we wanted her to continue winning, and this is a winning project," Sutherland-Hines said.

Principal for the school, Carla Ruddock, describes Shatara as a model student.

"She is a very cheerful, open, helpful student, who is always willing to assist in whatever way possible. She can be looked on as a role model because she is always there to guide and give advice to other students," she said.

The principal explained that the Miss Port Maria Primary pageant is one of the features of the school's Evening of Cultural Excellence which is held annually.

Students are given an opportunity to showcase talent pieces which secured them medals in the Jamaica Cultural Development Commission (JCDC) competitions.

Shatara has won several medals over the years for her stellar dance performances at the annual JCDC competition. She also does athletics, netball, is in her church's choir and is a volunteer at the JCDC.