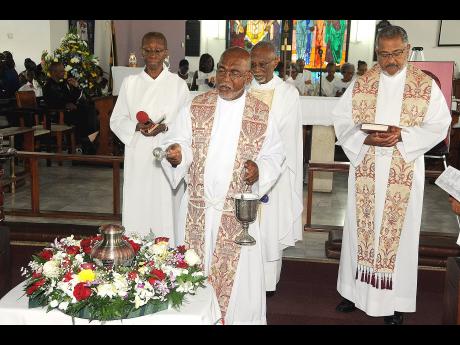 Lionel Rookwood
Officiating ministers bless the urn with the remains of Reginald 'Oral' Campbell at the Mass of the Resurrection for his life Church of the Transfiguration in Meadowbrook, St Andrew, yesterday.

Ushers at the Church of the Transfiguration in Meadowbrook, St Andrew, spent a good portion of the morning yesterday getting additional chairs to accommodate the large number of persons who turned out to celebrate the life of Reginald 'Oral' Campbell.

Persons were still left standing but that didn't damper the laughter, smiles and a few tears that flowed, as persons gave their tributes, remembering the dedicated husband, father and worker that he was.

His sister, Sharon Campbell Thelwell, tried to condense the numerous memories she had of her brother but noted that his jovial spirit and love for family were what stood out most.

"Oral was the most loving brother any sister could ask for. It was a priority for him to make sure that his sisters and family were taken care of. From an early age he also learnt to make things and to build things," recalled Campbell Thelwell.

"Growing up, we were not allowed to listen to reggae music. I remember when Oral bought me my first boom box and on a Friday and Saturday night we would play the records, but we had to go into the room where Mommy and Daddy couldn't hear," she added with a smile.

Burchell Gibson, manager, print, plant and circulation at The Gleaner Company (Media) Limited, said even though Campbell was known as the 'joker of the pack', it was a different ball game when it came to his job, as he was the consummate professional.

Campbell joined the staff of The Gleaner in 1981 as a clerk. He served as a collector before moving to his last post of regional supervisor in the Circulation Department.

"I received a call yesterday, with a lady crying. She said she has never met Mr Campbell, she has only interacted with him over the phone but he was always a professional. She was really broken. That speaks to the kind of person he was," said Gibson.

Campbell, who was 56 years old, is survived by his wife Brigitte and two children, Ricardo and Jason.