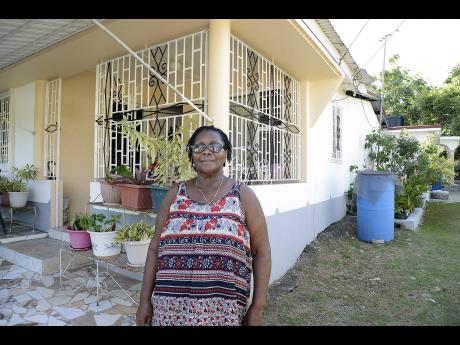 Ian Allen
Doris Parkes outside the house she retired to in Fairy Hill, Portland.

When Doris Parkes and Myrtle Passley, selected Fairy Hill in Portland to retire, they had no idea the drama they would face as it relates to potable water.

According to the two elderly returning residents, the public water supply is more off than it is on, and even when there is water running through their pipes, they are unable to use it because it is always salty.

It is a similar complaint from residents of Boston, Fairy Hill and Zion Hill, who all complain that the water coming through their pipes is salty. They claim that this is a long-standing problem that is frustrating.

The 73-year-old Parkes, returned to Jamaica with her husband, who is now deceased, in 2006, after living and working as a nursing assistant in New York for decades.

He led the family to Fairy Hill to set up their dream home, but Parkes said that dream is turning into a nightmare as she hardly gets any water in her pipes.

"The situation is so bad with the water that sometimes I feel like going back to New York. I was saying to my neighbour if I had known, I wouldn't have come. When my kids come to visit them can't even get water to bathe, it's a shame

"When we do get any water you can't drink it, it is salty. Sometimes I go away because I can't stand the condition of it," said Parkes.

She charged that when the National Water Commission (NWC) dues provide some water in the pipes in the community it is usually at odd hours.

"Sometimes I have to get up at 3 o'clock in the morning so I can catch a little. It's not often, and sometimes it's just barely going. It's not strong so it doesn't go in the machine so I can't use the machine to wash.

"I have to use my hands to wash my clothes and these hands not even good, my fingers are not good," said Parkes.

Passley, who is 90-year-old, also returned to Portland to enjoy her retirement but she is regretting that decision as she gets older.

"I am sorry I came back to live in Jamaica. When you are young it is not so bad, but you find that when you are my age you shouldn't come back because nobody don't business with you.

"Is rain water save us, if it wasn't for the rain water I don't know how I would manage. I'm here now 40 years suffering under this no water crisis, three weeks now no water," alleged Passley as she pointed to a bottle of water she was drinking.

According to Passley, each week she spends more than $1,500 to purchase bottled water.

"You call water commission and you beg and them maybe send water two times for the year. And when them come you can get only one drum of water and when I buy three box of this (points to water bottle) I still have to pay water bill every month. It's not right, we are suffering here," said Passley.

Felicia Deans has lived in Fairy Hill for 42 years and believes that the water situation has worsened over the years.

"Sometimes when you boil the water to mix tea it just get frothy. The pipe water bad, it no fit fi human consumption, and you have to change the pipe so often, them get rusty," said Deans.

Kishawn Higgins, children attend the primary and infant schools in the area and she tries to send them with bottled water when she can. If she can't afford the bottled water they drink water from the pipe at the school and often suffer from gastro-enteritis when they do.

Last week the communications department at the NWC said it was not aware of frequent lock-offs in the area.

Corporate public relations manager at the NWC, Charles Buchanan said the salty taste of the water is due to an issue of saline intrusion impacting the well source in the area.

"There is a need for a new source and while we are still exploring there is no immediate source of fresh water in that area. So ... because it's relatively close to the coast, what you have are instances where the amount of water being drawn out from the well exceeds the amount of fresh water that is available to the well.

"You will have some pull into the well of some amount of somewhat salty water from the surroundings," said Buchanan.

"It's an issue the commission is seeking to address. The fundamental problem though is that, especially during periods of drought when there is not a lot of rainfall, or a lot of fresh water recharging the aquifer round that well, the salty water tends to creep into that well source," said Buchanan.