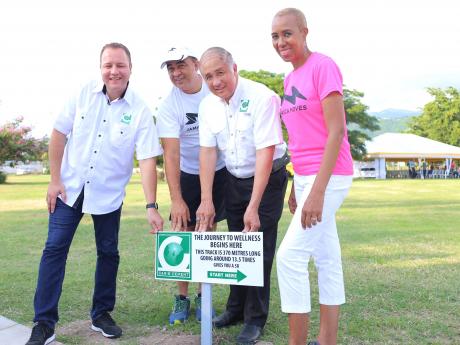 Caribbean Cement Company Limited donated a 370-metre jogging trail at a cost of just under $5 million to the Mona Heights community in St Andrew. From left, Peter Donkersloot, General Manager of Carib Cement; Dr Christopher Tufton, Minister of Health; Parris Lyew-Ayee Sr, Chairman of Carib Cement and Fayval Williams, Minister without Portfolio in the Ministry of Finance and the Public Service and Member of Parliament for St Andrew Eastern, in which Mona Heights is located, celebrate the handing over with the placement of the starting marker - Contributed photo.

This was disclosed by Peter Donkersloot, General Manager of Carib Cement, at the handing over ceremony of a jogging trail donated by the company in the Mona Heights Park in St Andrew.

The competition to win prize money will be launched in November.

Carib Cement explains that the cost of each project will be capped at $5 million and entrants will be required to submit proposals that will facilitate recreation, exercise as well as spaces for children and the elderly.

“We have made contributions to a number of communities and have seen the need for recreational spaces. We are creating an opportunity for any community across the country to improve its environment, by hosting a competition where residents can compete for the prize of the development of a project that will allow residents to come together and enjoy the outdoors safely,” Donkersloot said.

The concrete jogging trail which was donated to the Mona Heights community by Carib Cement is 370 metres long, costs just under $5 million and was completed in September.

Speaking at the handing over ceremony, Fayval Williams, Member of Parliament for St Andrew Eastern, in whose constituency Mona Heights is located, said the jogging trail project is part of a goal to develop as many green and recreational spaces as possible within the constituency.

Carib Cement has over the past three years contributed $200 million dollars in community outreach initiatives, which have positively impacted more than 200,000 persons across Jamaica.