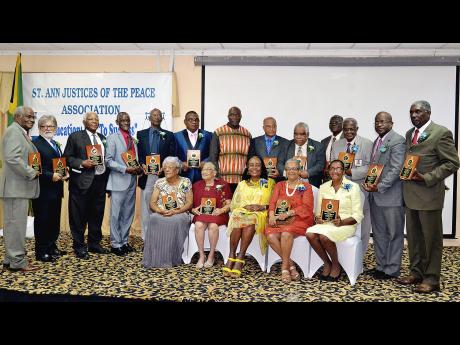 Carl Gilchrist
Custos of St Ann Norma L. Walters (centre, seated) and Chief Justice Bryan Sykes (centre, standing) with justices of the peace of St Ann who were recognised on Saturday in a ceremony at the Cardiff Hotel in Runaway Bay.

Twenty-one justices (JPs) of the peace, each of whom has served the parish of St Ann for decades, were honoured by the St Ann Justices of the Peace Association at its annual award ceremony at the Cardiff Hotel in Runaway Bay, St Ann, on Saturday.

The JPs were given plaques in recognition of their long service.

At the ceremony, Moneague College student Tia McInnis was awarded the Radcliffe O. Walters Scholarship, valued at $100,000, which the association has been offering since 2011.

The list of awardees included several persons who have served with distinction in their chosen professions, which include, among others, education, medicine, law and business. A few of the awardees were unable to attend the function.

Custos of St Ann Norma L Walters, in her remarks, thanked the awardees, and hailed the voluntary service they give, which she noted totalled over four million man-hours. The custos said the justices of the peace must be applauded for their contribution, and also thanked them for accepting the "small token" being offered as recognition.

"Let us seek to serve well to make an amazing difference; let us work with our heads, hearts, souls and bodies," she encouraged.

He said the JPs get great satisfaction and fulfilment from serving and the recognition would encourage them to continue their contribution.

Chief Justice Bryan Sykes, who was the guest speaker, reiterated his desire to make Jamaica's justice system the best in the Caribbean in three years and one of the best in the world in six years.

Meanwhile, McInnis, a Westwood High School past student who is in the second year of the bachelor in secondary education course at Moneague College, expressed delight at being awarded a scholarship.

"I know I will live my vision, my dreams will come true; I promise to create opportunities for students to enjoy learning. I am persuaded that God will see me there. I am overjoyed that people believe in me," she stated, to applause from the audience.