He only sees her smile 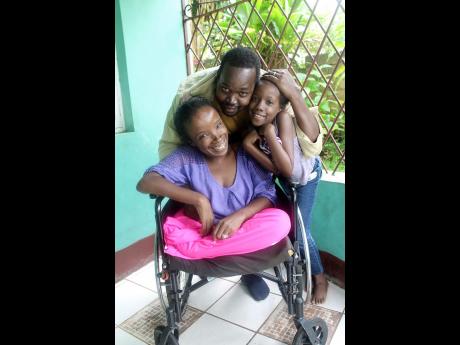 Tamara Bailey
All smiles from the Grahams: Kevin and Chanice with their daughter, Jada.

When Chanice Taylor and Kevin Graham met in a chat room 11 years ago, they were not quite sure how things would unfold, especially because they were both in different relationships and distance stood tall between them.

But fate would have it that these two would become one, despite the odds.

"I am from Manchester and Kevin is from St Thomas, but at the time we met in the chat room, he was working in Westmoreland. On my birthday in 2008, I was at the hospital and he called to say he was in Mandeville. I thought he was lying - I wasn't expecting him to be here and it was the first time that I would be seeing him."

The Grahams said that they used a chat room called J-Smart that did not afford them the ability to share photos. However, Kevin knew what to expect when he came because Chanice was very open with him from the onset.

"Mind you, by the time we met up, we were both single. I told him everything: I told him I was wheelchair-bound and he knows about my condition. I have spina bifida. I was basically born with my spine open. Doctors closed it but my legs don't work. They say I am paralysed from my waist down, and I lost a leg due to poor circulation."

Mesmerised by her personality and charm, a smitten Kevin found returning to Westmoreland that day to be one of the hardest things.

"He was really sweet and he bought me a gift; a beautiful watch and a twin teddy bear that I guessed represented us," beamed Chanice.

Eventually, Kevin made the decision to quit his job and move to Manchester to be with his love.

"He wasn't working for four long months, but he made a sacrifice for me. None of my other relationships were like this. In the past, I was lied to and cheated on. When I met Kevin and I saw all the effort that he put into making this relationship work, travelling from so far each time, waiting hours for a bus to load, and knowing my condition, he could have decided not to meet me, and after seeing me he still didn't take to the hills."

Kevin told Family & Religion that he doesn't know all the elements that really pushed him to make these huge steps, but he knew for sure that he loved Chanice's smile and how supportive she was - attributes she still possesses to this day.

Six months after the meet up, Kevin asked Chanice to be his wife. Eight years later they got married.

"He asked me on the phone if I would marry him and I said, I would marry him one day. He said, 'would you marry me now?' and I hesitantly said, yes, because I wasn't expecting this. The following Friday, when he came up, he took me to a jewellery shop, measured my finger, bought a ring and popped the question right there, on one knee."

The Grahams said that people have made rude remarks about their union, but they never entertain those people.

"I have heard that I am rich that's why he is with me. But if only people knew! I won't lie though; we do get more compliments than we do insults."

A lover of life with a bubbly personality, Chanice is now hoping to get her cosmetic online business (Chan's Hair and Cosmetics - Facebook) back on track and even get a job to help her husband, who is now only working twice per week, with caring for their seven-year-old daughter.

"Here's to more date nights, more years with my miserable (laughing), but super-caring man; more years with our very supportive family. It's not all happy happy for us - the bad will come - but we have learnt to just stick it out and be patient with one another," Chanice ended.