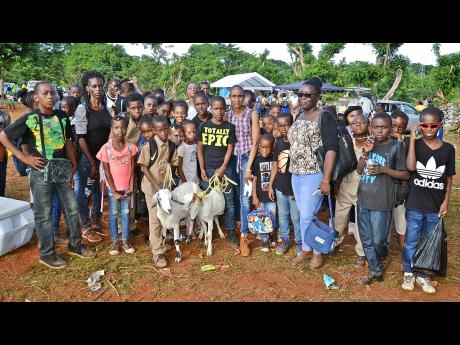 From a mud-fest last year to a dust bowl this year, the grounds at Minard have never been an ideal location for patrons, but at the 19th staging of the Minard Livestock Show and Beef Festival last Thursday, thousands of persons turned out at the home of cattle in Brown's Town, St Ann, to support the event.

Participation from schools from all across Jamaica ensured that the numbers remained high, with students from infant, primary, secondary and tertiary institutions showing interest in livestock farming.

As is customary, students were given the chance to win animals and several did so, leaving the event with goats and cattle, some with the hope of starting a farm for themselves.

The event provided a happy experience for the students, and of those who won, maybe none were happier than the 48 students from Free Hill Primary and Infant School in St Mary.

The small school from deep rural St Mary, with just over 200 students on roll, was well represented by those who got the opportunity to visit the festival, and despite the dust nuisance, nothing was going to spoil their joy.

First, the school had won a goat in competition at last year's event but was unable to collect the animal. They collected it on Thursday, much to their pleasure. Added to that, another student won another goat, so the team journeyed back to their community with two animals.

Teacher at the school Celia Pryce, one of six staff members who accompanied the students, said being able to go back to school with the two animals was a thrill for the students.

"That's the height of their excitement. For most of the students, it's their first time coming, and they're really excited. They had fun," Pryce explained. She said that outside of the fun and excitement, though, the students were able to learn a few things at the event.

"They would have learnt something also, because most of them are 4-H Club members at school, so they used the opportunity to collect information to use in the competitions they enter under the 4-H banner. So, when they go back to school, that information will come in handy."